The first step in partially assembling the jacket for the initial fitting is to affix the canvases to the front pieces. This is done by lining the canvases up where they will go on the finished jacket and “basting” the two pieces together with gigantic, simple stitches of white thread. 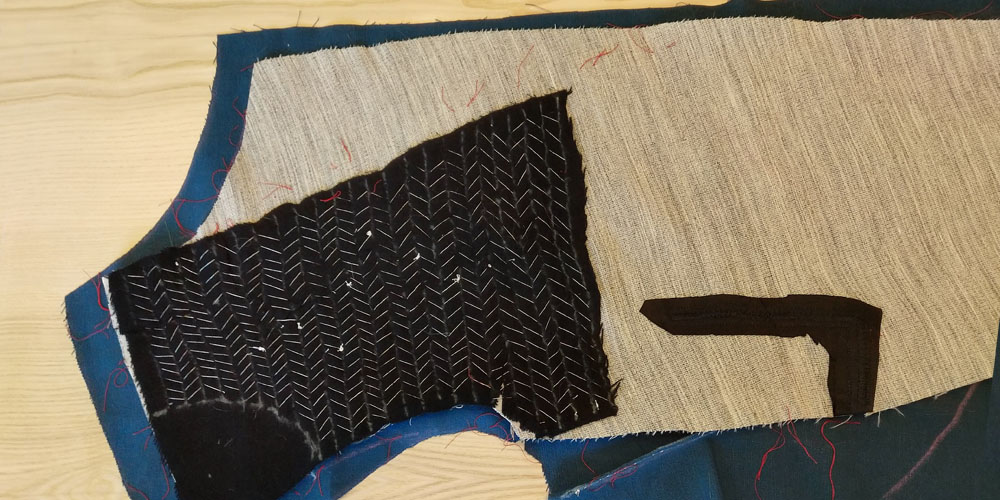 The canvas, in position, ready for basting.

This is also the first opportunity to put in the “twill tape.” I put the quotes around it because it is called tape, but it has no adhesive. Just because something’s long, wide, flat, and comes in a roll, that doesn’t make it tape. In my opinion, if it doesn’t either have at least one side smeared with adhesive or contain magnetic oxides arranged in such a formation as to play ‘80s pop music, it is not, “tape” What we have here is twill ribbon, my friend, but that hardly matters. What’s important is that it needs to be sewn in along the lapel’s roll line, the place where the jacket front folds around backward to become the lapel.

You start by pinning the twill tape where it belongs, then, you baste it in place with big stitches. 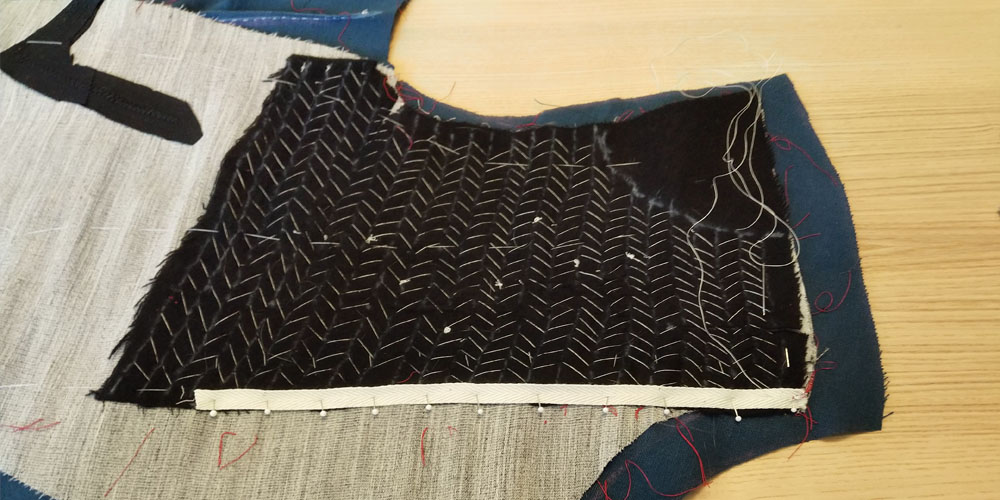 I still say it isn’t tape. the fact that I have to pin it in and sew it on place just proves my point.

When the pieces are basted into place, turn the front piece over. You’ll see straight lines of white thread, like this. 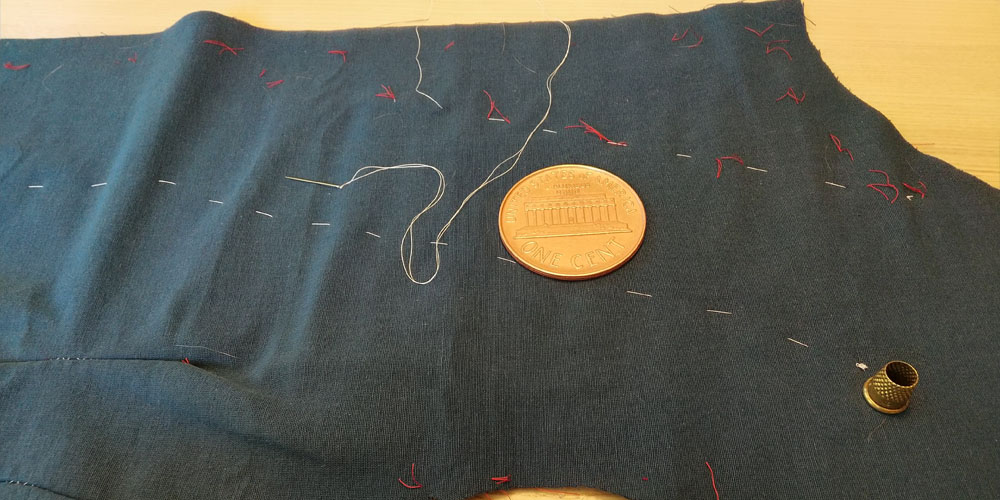 Featuring the long-awaited return of the oversized novelty penny!

This should look familiar to anybody who has ever seen a suit fitting depicted in a movie or TV show. Here’s a screen cap from one of my personal favorite examples from the film Ocean’s 11. If you look closely, you will see the white threads running down the front of his jacket.

His name is Lyman Zerga.

This is your first chance to see how the canvases give shape to the front of the jacket. Note in the picture below, even though the two front pieces are not in their final configuration, you can see how they would naturally curl around the wearer’s body. 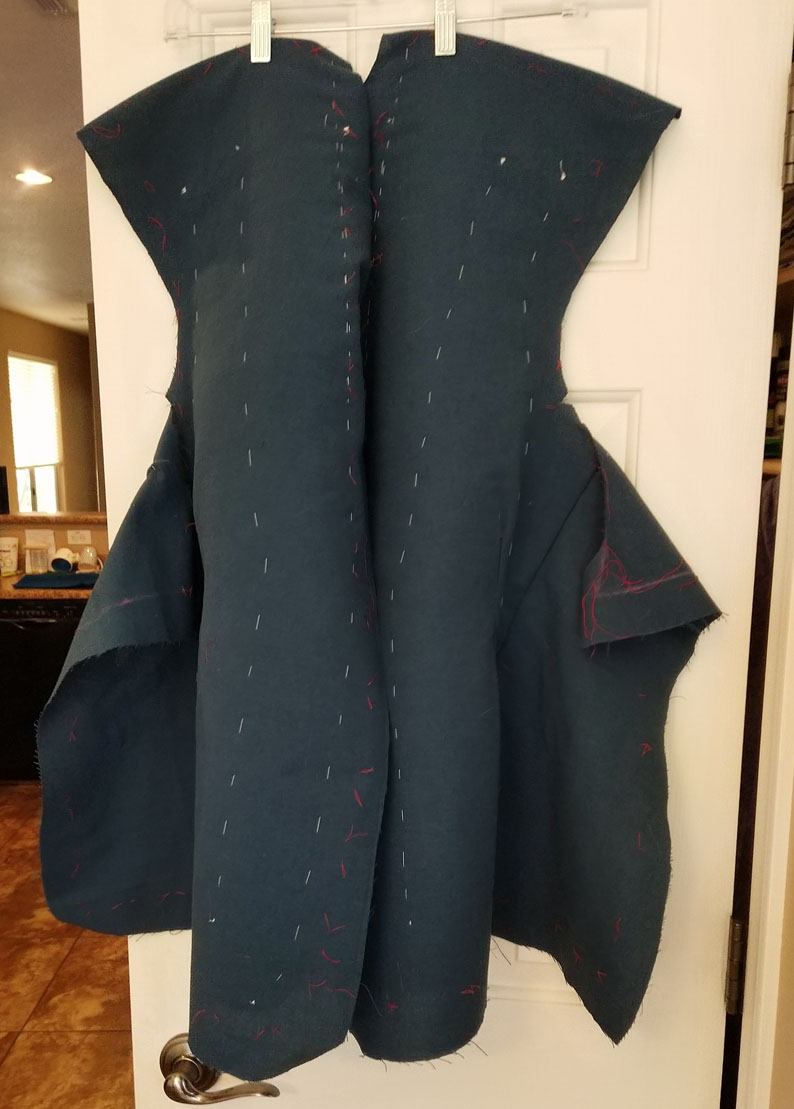 To show you an example of the effect in a finished garment, here’s a screen cap from Ocean’s 13. Note how, even though George Clooney’s jacket is unbuttoned, it curves in toward his midsection instead of flopping open or hanging there limply.

Shown here heroically extorting a petty criminal into committing a much larger, and in this film, logistically unrealistic crime.

When I cut the fabric, I erred on the side of caution and left a lot of room beyond the seam line dictated by the pattern, which is good, except that all that extra fabric would throw off the look of the partially assembled suit, and since seeing if the suit looks right, and fixing places that don’t is kinda the point, I chose to quickly baste the overage so that it doesn’t show. 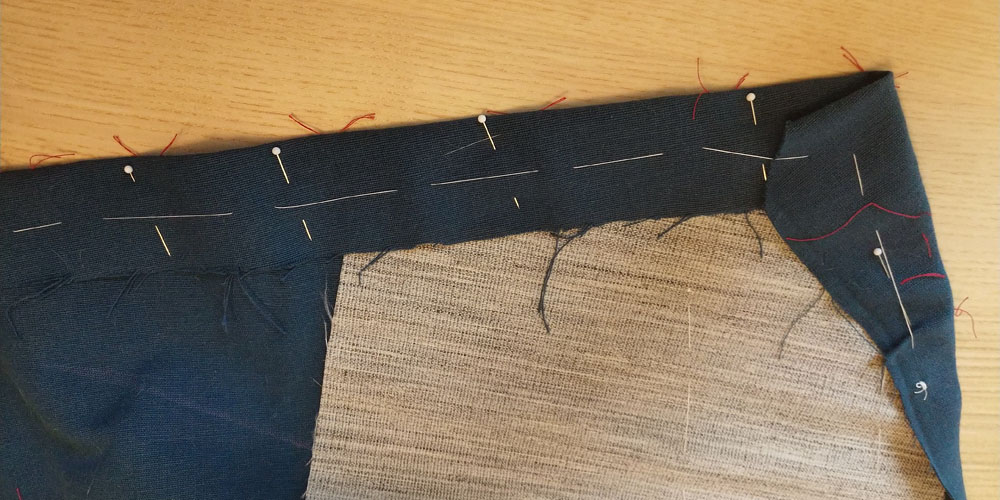 It isn’t pretty, or durable, or effective, but it was quick, and I always say, if you’re gonna do something that’s probably wrong, at least get it over with.

Now we move on to the collar. I’ve always been good at picturing how objects of various shapes will fit together. I scored very highly on the spatial reasoning portion of the S.A.T.s. All that said, the collar makes no sense to me. It’s initial shape, the way it’s folded, how it attaches to the lapels and neck, it all just does my head in.

The collar will eventually be covered in the same material as the rest of the jacket, but its underpinnings are made of canvas and felt.

Great, you may be thinking. You already have both of those! 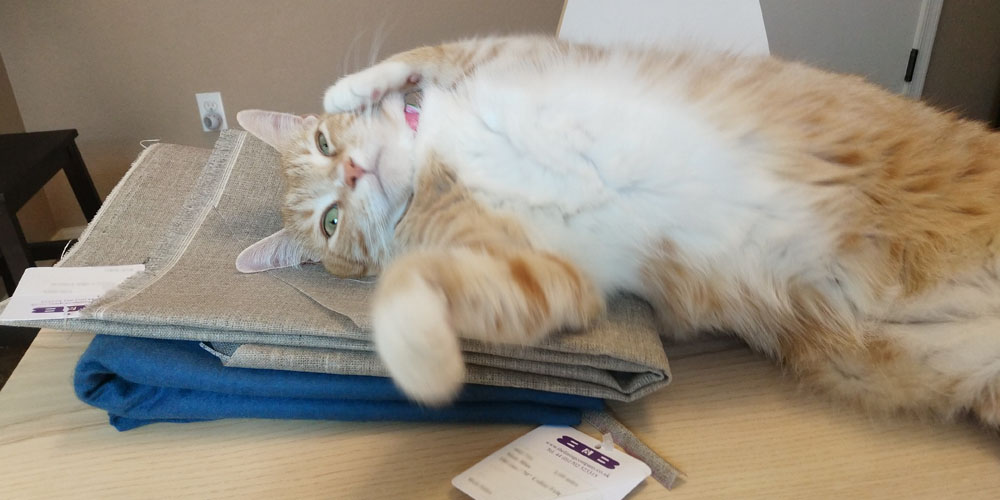 To form the materials into the bizarre shape that I’m assured will work, first you cut two copies of the collar pattern out of the canvas, and two more out of the felt.  The individual pieces, to me, look like one of Arya Stark’s eyebrows. 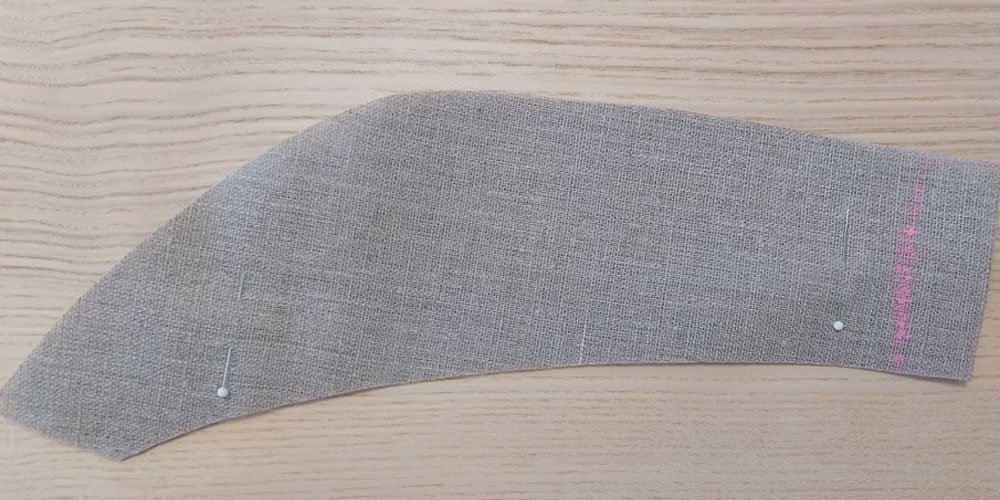 A collar is not finished yet.

Stitch the two pieces of canvas togther at the end, and do the same with the felt. Once you stack the two collar pieces together and baste them together along the fold line marked on the pattern. When you’re done with this step they should resemble Dr. Johhny Fever’s mustache from WKRP in Cincinnati. 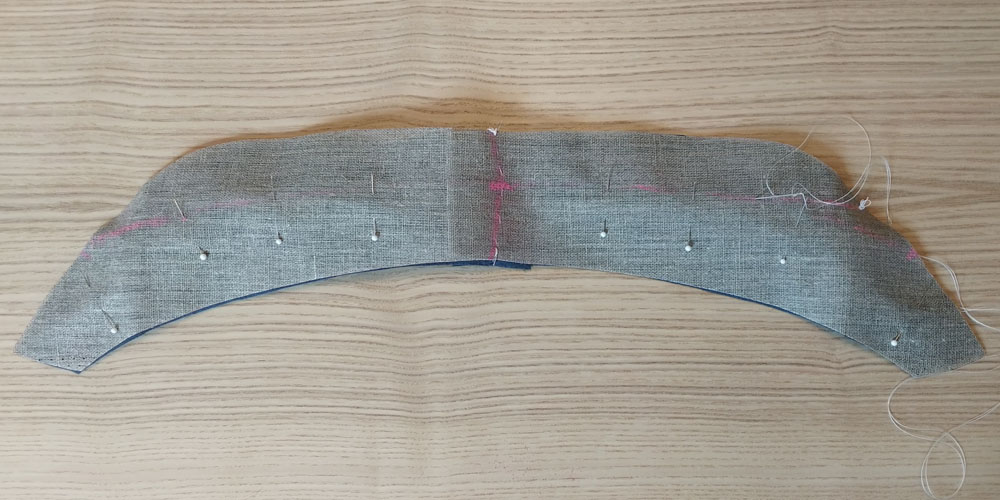 Now bend the collar along the fold line, and the collar will take on its final form, the mustache of the rageaholic dad from American Chopper. 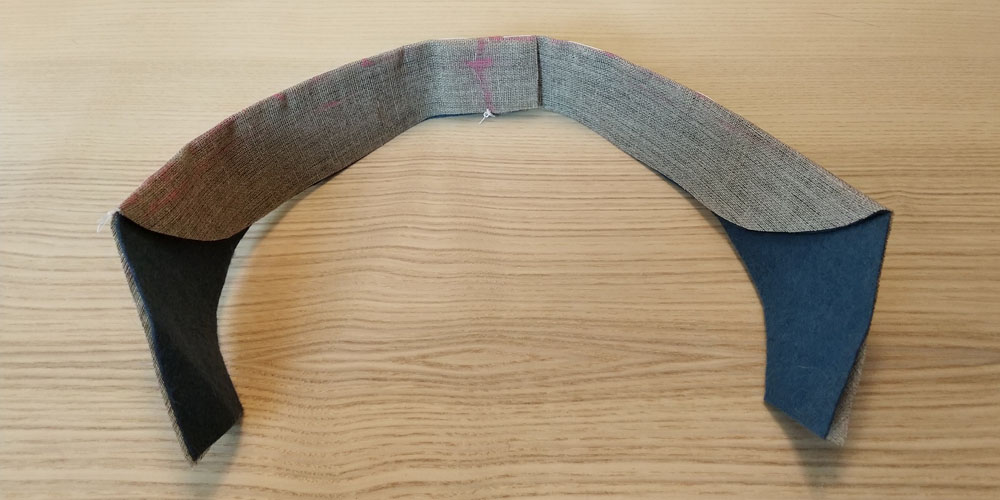 I think it also looks a little like the ship that crushed Charlize Theron in Alien Covenant.

And that’s it for today. Next week, I try to assemble all this stuff into something vaguely jacket shaped.