When I was in high school, I got a job at a local restaurant as a dishwasher. I told my best friend. He asked me, “Have you ever washed a dish?”

I didn’t admit it at the time, but the answer was, “Yes, but not well.”

The project of tailoring myself a suit from scratch is going to require me to do a surprising amount of “hand stitching.” If one were to ask me if I’ve ever stitched a stitch by hand, I’m afraid the answer would be the same. “Yes, but not well.”

Around a decade ago, I got a patch that I wanted to put on my favorite travel bag. I attempted to stitch it on myself. I used the wrong size needle (too small and delicate), the wrong kind of thread (cheap and old) and put it in the worst possible location on the bag (on the outside of a pocket into which my hand could barely fit). The result looked so amateurish that I retired my favorite bag and simply framed the patch and hung it on the wall.

So, before I started work on my suit, I wanted to get a little hand stitching practice under my belt. Luckily, I had the perfect project. See, a few years ago, I found a pair of pants I liked. They’re very lightweight cargo pants made by Columbia Sportswear. They worked so well for me that I bought several pairs in an assortment of colors, and have worn pretty much nothing else on my lower half for the last three years. (As I’ve said before, I’m not what you’d call a clothes horse.) Unfortunately, they don’t make these pants with legs short enough for my Richie-Rich-esque physique. Thus, I’ve been rolling up the hems of all of these pants whenever I’ve worn them, which, as I said earlier, is pretty much “constantly.”

This project was the perfect opportunity to put a stop to my years of wearing ugly, ill-fitting cargo pants. From now on, I wear ugly, properly-fitting cargo pants! And I got some much-needed hand stitching experience in the process.

Below, I will be sharing photos of my “handiwork.” It has occurred to me that it would be useful to include some common, everyday item in the pictures to give you a sense of scale. Therefore, all of the photos will include my ordinary, household, giant-sized novelty quarter. 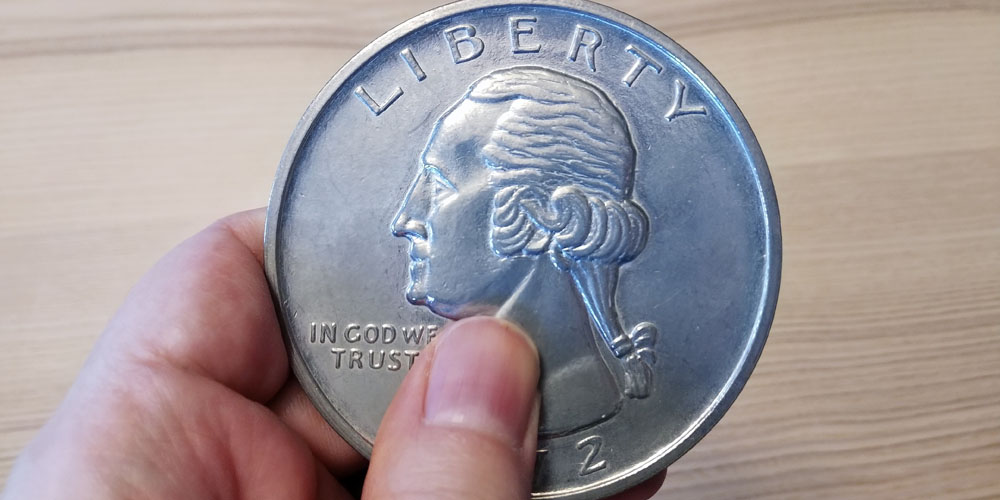 Yeah, that should clear things up.

Day one – The khaki pants, with a simple running stitch. 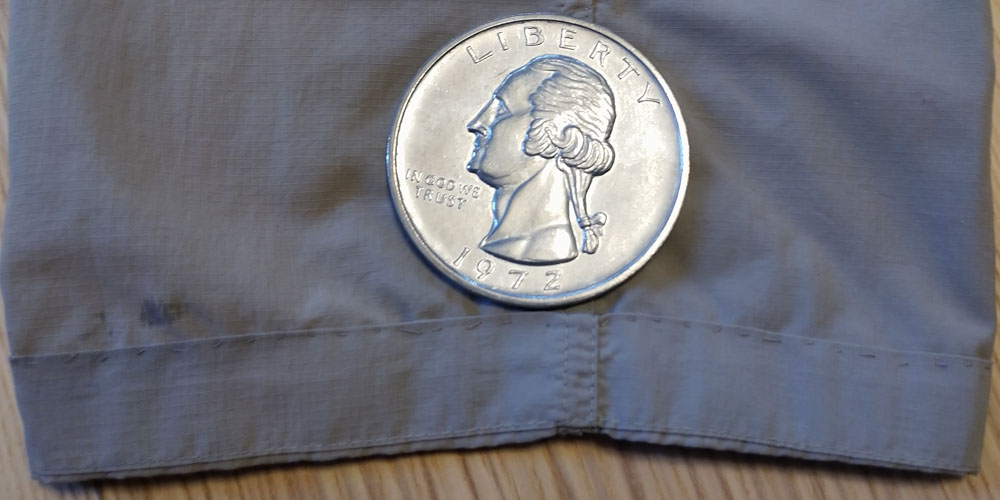 I’m not embarrassed to wear the pants out in public because the thread doesn’t stand out and nobody’s looking at my hems anyway, but they look like the work of someone who doesn’t know what they’re doing, which, of course, they are. I wonder if this is what critics mean when they say someone’s work has “a rough, honest quality.”

Day Two – The lighter khaki pants, with a basic back-stitch.

A couple of hours hand stitching was enough to give me some small amount of muscle memory, which made the stitching easier this time. Also, I experimented with using a double strand of thread, knotted together at the end, which prevented the needle from unthreading, but caused the thread to tangle repeatedly, costing me almost as much time. 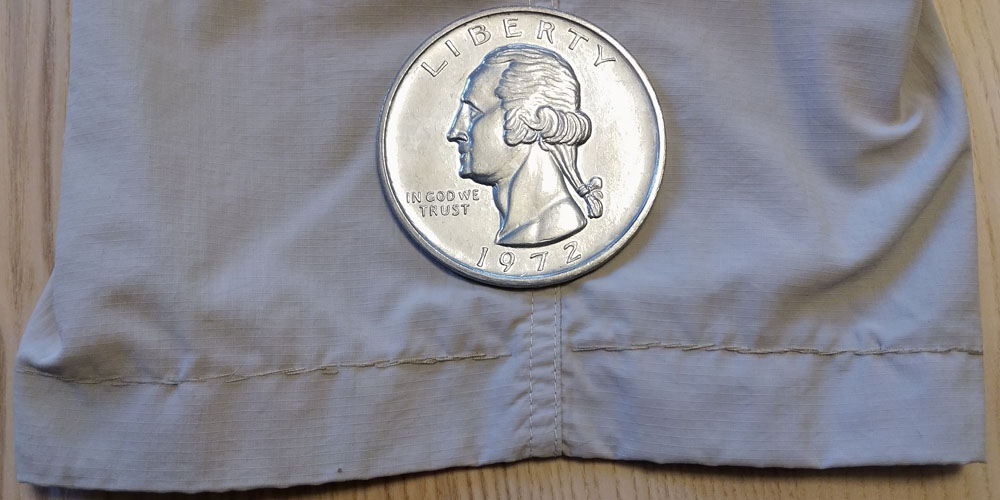 Somewhat less that great. It’s a good, strong stitch, and from a distance, it just looks like a line of thread, but up close . . . Frankenstein’s monster had prettier stitches on his face than these.

Day 3 – The gray pants, with a blind hemming stitch.

I got off to a bad start. When I was ironing the cuff before sewing, I accidentally used the wrong setting and melted part of the pant leg. I didn’t go all the way through the material, and the iron was not permanently damaged, but the fact that I made that mistake didn’t bode well. Neither, frankly, did the fact that my pants are meltable.

The blind hemming stitch is a much more challenging stitch, which required me to use the tip of the needle to pull just a few threads from the back of the weave so that the thread would be anchored to the fabric, but wouldn’t show through on the outside of the pant leg. Also, there was some extra challenge because the pants are made of a sort of nylon, and are extremely thin.

I finally solved my de-threading problem by using an open-topped thimble. I was able to push the needle through the fabric with the armored side of my finger, then use the exposed tip to put pressure on the eye of the needle, holding the thread in place as I pulled the thread through. This solved the issue, and with the mention of the “armored side” and the “exposed tip,” makes sewing sound macho and sexy. 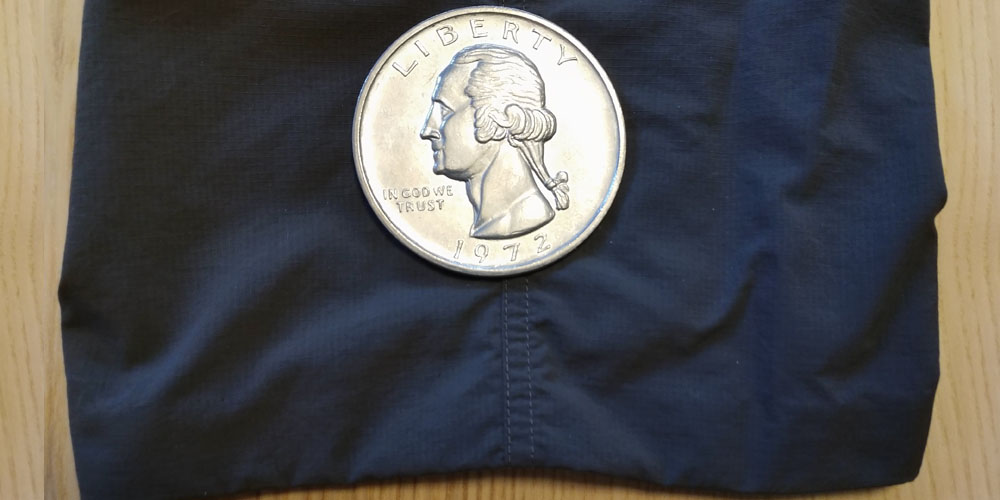 I am genuinely proud of how these pants came out. They don’t look quite as good when viewed from the inside, but if I’m in a situation where people are closely examining the insides of my pants, I’ve probably got bigger problems than inexpert stitching

Day 4 – The black pants, with a second attempt at the back stitch.

Now that I’ve had some practice, and I have the un-threading problem beaten, the stitching went faster and came out much better. 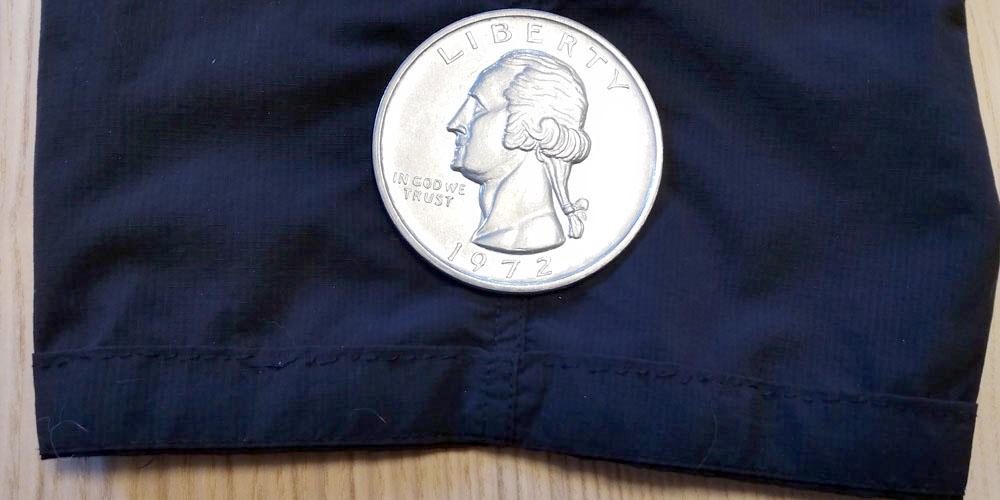 Again, I am legit proud of these stitches. Oh, you wouldn’t want to have me do any decorative stitching, or suture up your facial wound, but I think this looks pretty good.

So, I’ve learned several lessons, have increased my confidence, and have hemmed four pairs of pants after wearing them for multiple years. All in all, I call that a success. There is one problem that has cropped up, and I don’t yet know what I can do about it. When embarking on a project like this, one often finds there are problems you didn’t see coming, and there are problems you did. One that I saw coming, and has, in fact, turned into a real issue is that one of our cats, whenever she sees me doing anything sewing related, wants to help. 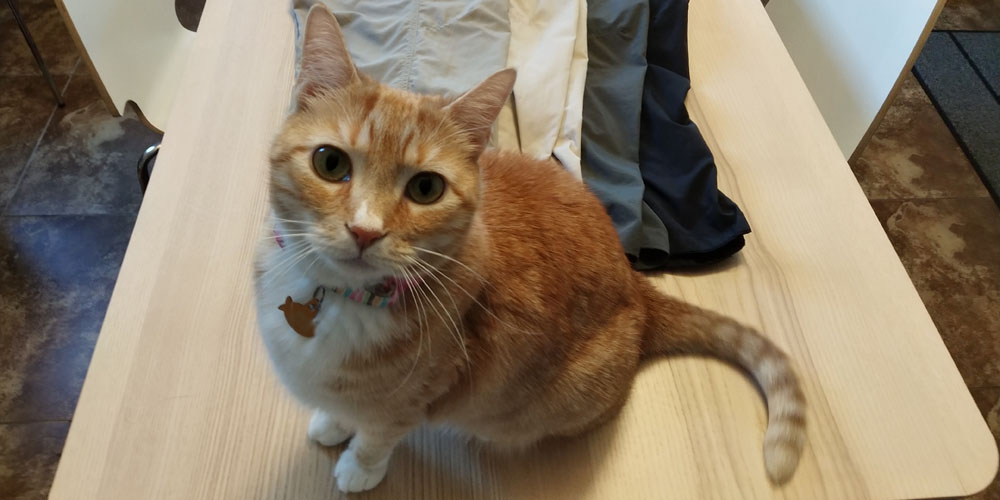 Here’s a photo of her “helping” me take the photos for this blog post. 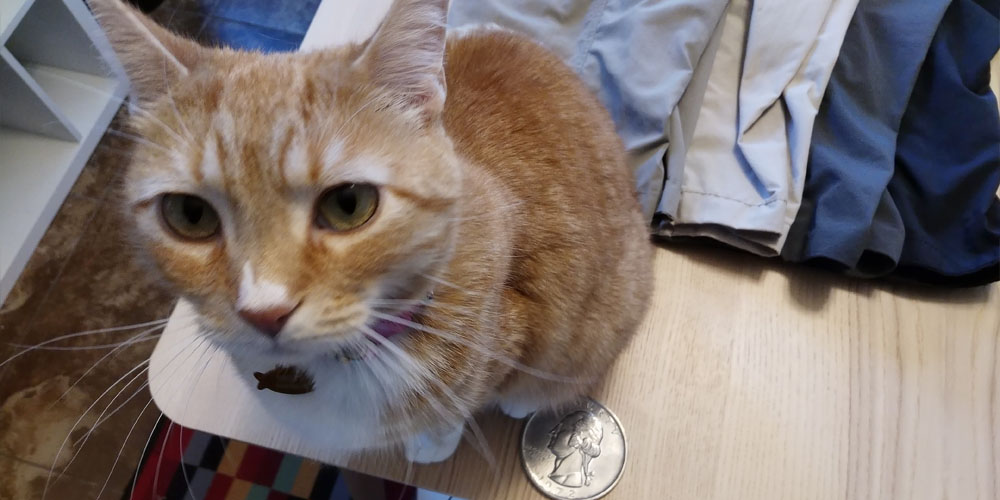 And here’s a photo of her with the giant-sized novelty quarter, for scale.