When dealing with a skilled trade, like tailoring, there are often little secrets that make the difference between a hobbyist and a professional. For example, when I was a professional comedian, I quickly learned that one of the most important assets a beginning comic could have, more so than natural talent, determination, or a decent act, was a dependable automobile. Preferably one that could carry three full-grown adults (opener, middle-act, and headliner) and their luggage.

My friend Ric and I used to joke that a comedian’s first promotional headshot should be a picture of their car.

In my research, I have learned that the thing that often makes the difference between a professional-looking handmade garment and an amateur-looking homemade garment is not the quality of the sewing. It is the quality and quantity of the ironing.

My understanding is that if you want the finished product to look professional, crisp seams are the key. You must iron the fabric before you cut it, then iron the pieces after you cut them, then iron the seams after you sew them, then iron the whole garment when it’s done. If this is an exaggeration, it’s not much of one. There are many videos of professional tailors making suits on YouTube, and in them, you’ll see that the pros tend to have a hot iron at the ready at all times.

Also, if you want to do the ironing right—and I very much do—you need certain special equipment.  An iron and an ironing board won’t cut it. Three of the items you need are called a pressing mitt, a tailor’s sausage, and a tailor’s ham. These items can be purchased. They are not terribly expensive. But! I had just dropped a chunk of money on fabrics, there were instructions online for how to sew your own, and I needed the sewing practice, so I set out to make my own pressing tools.

A pressing mitt is essentially a flat, thumbless oven mitt. You put your hand in the mitt, then you put the mitt under whatever you need to press, and you can essentially form your hand into a small, moldable ironing board.

(As an aside, there’s a documentary on Netflix about Mitt Romney. I was not overly fond of Mr. Romney when he was running for president—he always seemed stiff and unrelatable. In this documentary, you see him and his wife preparing for a black-tie affair. He notices that there’s a crease in the sleeve of his dinner jacket after he’s already put the jacket on.

Instead of taking the jacket off, he does what most guys would do. He attempts to iron the wrinkle out while still wearing the jacket. So, this man, who at the time was running for president, pressed a hot iron to his arm repeatedly, not stopping even when it got hot enough to make him say “ouch.”

Watching that, I thought, Why didn’t I see this guy during the campaign? I kinda like this guy. At least I can relate to him.

One of the few bright sides I can see to the current political fiasco through which we are all living is that it has dispelled the myth that we can’t allow presidential candidates to seem human, or show some personality.

I only bring this up here because what Mr. Romney needed in that situation was a pressing mitt. Ironic, given his first name.

The tailor’s ham is a firm, stuffed object shaped vaguely like a pressed ham. It is useful for shaping the shoulder of a garment, which, I don’t know if you’ve noticed this, is not flat. The sausage is the same as the ham, only instead of being shaped like a ham, it is shaped (wait for it  . . . ) like a sausage. It’s used for pressing seams. It allows you to specifically and accurately press the line where the two pieces of fabric meet.

The mitt also calls for heat-resistant cotton batting, which we happened to have sitting around the house because my wife made a few oven mitts a couple of years ago.

The ham and the sausage need stuffing. Most instructions call for sawdust, but one said that you could substitute the output from a cross-cut shredder, which I had in abundance.

Some of you might be thinking that paper seems awfully flammable to be filling an item meant to be used with high heat. To that I ask, “And sawdust isn’t?” Seriously, the paper will be separated from the heat by a layer of wool and the garment that’s being ironed. Also, irons don’t actually get that hot, and often involve steam, the wettest of wet heats. In short, I am not concerned.

Anyway, to make the mitt, I cut out a paper pattern in the shape that I wanted the mitt to be, then I used the pattern to cut three pieces of linen, one of wool, and one of the batting. 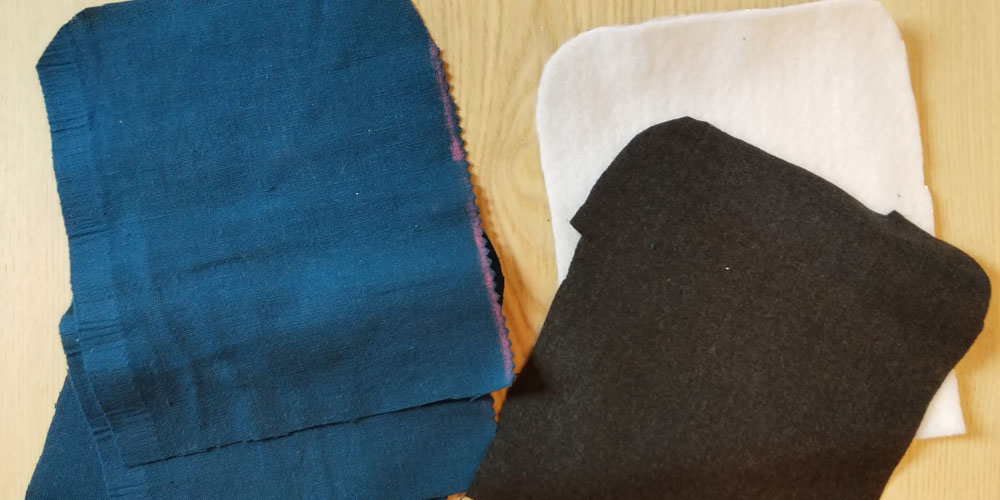 Note the neatness of my scissor cuts. No, sir, I don’t see how this “making a suit” plan can possibly go wrong!

Sewing all of the layers together wasn’t difficult, but getting them all in the right order, and seamed in such a way that they did what I wanted when I turned it inside out at the end did take some thinking.

The ham and the sausage were easier, as they both only involved two pieces of fabric, the wool top and the linen bottom. The ham’s pattern was a big egg shape. The sausage’s was . . . sausage-shaped. I machine-sewed them together, leaving one end open on each of them to facilitate the stuffing process.

The mitt is completed. The ham and the sausage, not so much.

The stuffing was harder than the sewing. It involved a funnel and patience. I had one of those things.

Anyway, once they were stuffed I safety pinned the ends shut temporarily.

Safety pins! They’re right up there with duct tape and hose clamps in the pantheon of tools that are incredibly useful, but make your project look slapped together with whatever you had in your junk drawer.

Then I hand-sewed them closed.

The ham is sealed! 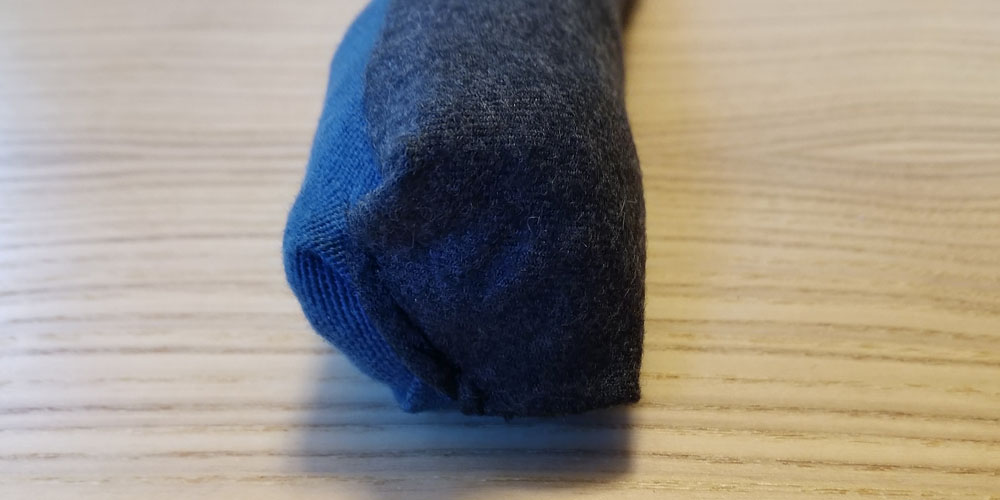 The closing seam on the sausage looks a bit mouth-like to me. I think there was an episode of Star Trek: The Next Generation where Barclay was menaced by monsters that looked something like this.

There they are. They aren’t really pretty, but they are tools; they’re not supposed to be pretty. The ham and sausage feel good and solid, but look a little loose in these photos. I believe they’ll do their jobs, and they’ll get tighter with time as I use them and the wool and linen shrink.

And now, to give you a clear sense of how large the finished products are, here is a picture of the finished pressing mitt, tailor’s ham, and tailor’s sausage with my oversized novelty quarter. 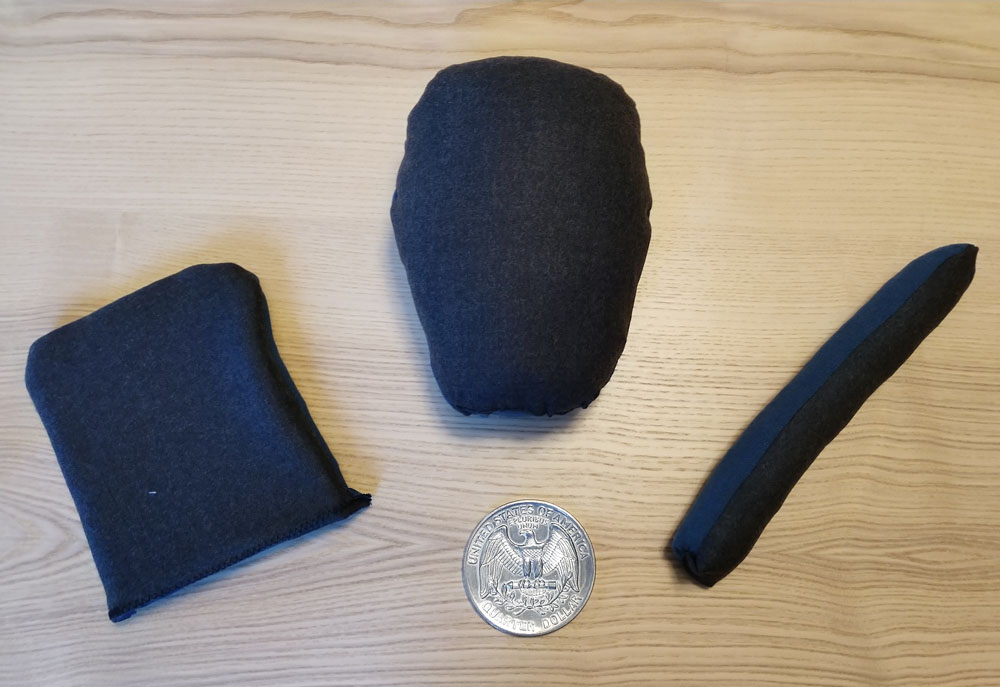