Making Sure the Cuffs and Collar Match

We’ll start with the sleeve.

The sleeve seems like it should be simple, as it is, at the end of the day, a big cloth tube through which you poke your arm. How hard can that be?

Well, it’s not just a tube. It’s a curved tube. A curved tube that tapers toward one end. And it flattens out at the wide end, where it connects at not quite a full right angle with another opening, which wouldn’t be so bad if that opening was perfectly round. That opening is not perfectly round. It is the armhole. (Or scye . . . I know. You’re sick of this scye stuff. Believe me, so am I, but I subscribe to the Stan Lee rules of publishing. The most famous is “Don’t distract Kirby and Ditko from their work with lots of money or credit,” but only slightly less well know is this: “Every comic is someone’s first.” That means every post in this blog is the first time someone learns that the armhole is called the scye, and if I don’t mention it, they may never find out. Do you want that on your conscience? I didn’t think so.)

When drafting the sleeve pattern, you start with the measurement from shoulder to wrist. That gives you the length of the sleeve. Then you use measurements of various parts of the armhole (or scye) on the pattern of the front and back pieces to determine the size of various components of the shoulder.

I worked through the instructions, and in the end, I had this.

Sorry for the oversized glare coming from the equally oversized novelty quarter.

My first thought was that it looked awfully wide. I’m short and stout, but not that short and stout. It looks like a sleeve pattern for a suit for one of the Dwarves from the Hobbit.

I double checked all of the instructions, and all of my measurements, and it looked like I’d done it all right, so I figured I’d trust the pattern for now, assume that it was only my inexperience that made it look wrong to me.

I moved on to the collar.

With the collar, all of the measurements you need to draft the pattern come from the completed front and back piece patterns. I took the necessary measurements, applied them to the paper as instructed, and this is what I ended up with.

Notice, I did two. I noticed a small math error right as I was finishing the first, so I did the second, which … the second came out pretty much identical to the first.

Several hours of work had resulted in two patterns that didn’t look at all right. There was nothing for it but to test the new patterns by adding to my paper test vest!

I started with the collar, cutting out two copies of the weird abstract shape the pattern had provided, then affixing the pieces together and folding them as instructed, which left it looking like this.

It looks like a template Yosemite Sam’s barber would use to make sure he trims Sam’s mustache the same way every time.

It still looked really weird to me, but I figured, “What the hell,” and attempted to tape it to the paper vest. Here’s how it came out. 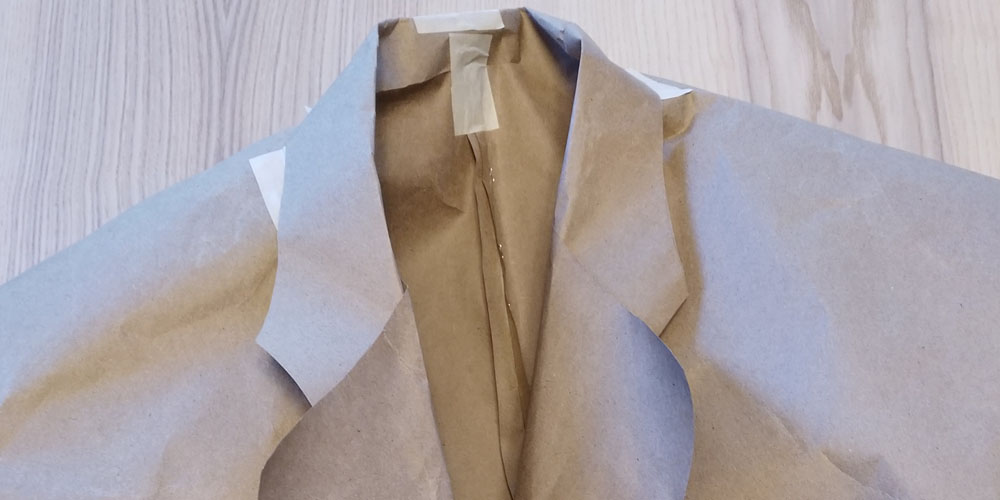 Truely the last word in paper elegance. Notice the fine masking tape and staple work along the seams!

Not bad, right? Not bad at all.

I was greatly encouraged by this success, and proud of myself that I’d had the steady nerves and perseverance to trust the pattern, even when it looked wrong to me. My spirits buoyed, I cut out and constructed my paper sleeve. 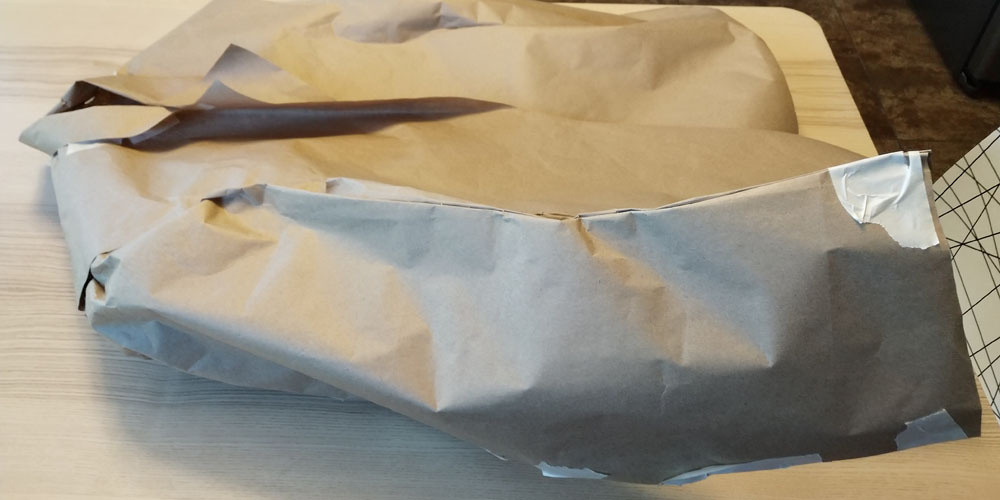 Photographed with an oversized novelty sleeve, for scale.

It looks perfect, if you’re making a suit for Popeye.

I think we can all agree, that can’t be right.

Of course, I seriously considered just taking the scissors and making the pattern pieces a bit narrower. You know, eyeballing it. I knew instantly that I didn’t want to do that. But, I also knew I didn’t want to try to draft another sleeve. Instead, I decided to move on to the next step and revisit the sleeve later on.

Next time, there will be drama, adversity, and unintentional saucy puns as we get into my pants!