Material Possessions, or the Lack Thereof

When last we left things, I had run out of fabric for the inexpensive test suit just before cutting the final piece of the pattern, the “front facing,” which includes the lapels.

Luckily, when I bought the material, I thought ahead. I knew I might need to purchase more of that fabric, so I didn’t select some small-lot remnant that was only available in limited quantities. I also knew I have memory issues, so I didn’t buy said fabric from one of the several nearly-identical fabric stores in the area, forcing myself to remember which one I bought from, then dig through their vast selection looking for the exact shade of blue I’d purchased before. I bought my fabric at IKEA, a painfully memorable location with a severely limited selection of fabrics, but where, what fabric they do carry, they have in massive quantities.

Back when I was doing stand-up comedy, I had a bit I could never get to work as well as I thought it should. The idea was that IKEA is built on the principle that you’re more likely to buy furniture if you’re trapped in a baffling maze.

It’s funny—most of the time, when I talk about my stand-up career, I start with that same sentence. “Back when I was doing stand-up, I had a bit I could never get to work as well as I thought it should.” That fact kind of tells the whole story, doesn’t it? 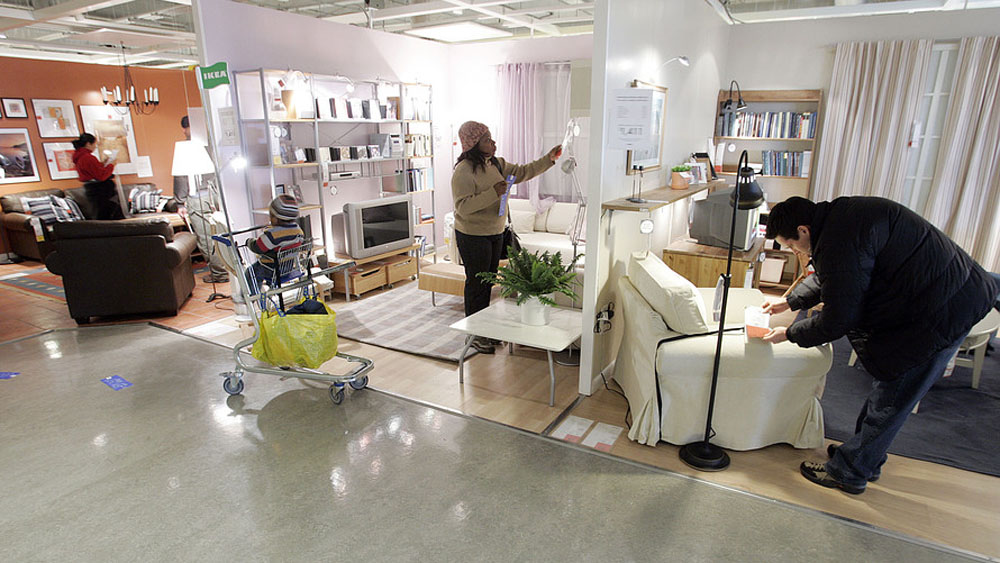 (Note: Caption best read in the voice of Werner Herzog) People who are dissatisfied with their homes instead spend their Saturdays here, walking a disorienting path past dioramas depicting the imaginary dwellings of imaginary people they imagine are happy. All of the items are for sale but will require the customer to handle the assembly themselves. This serves to remind us that in the end, we all must put forward the effort to earn our own contentment. Also, it helps keep the prices low. (Image source: marketwatch.com)

Anyway, confident that I had used my intelligence to cover myself in this circumstance, I drove to IKEA to purchase the fabric I so desperately needed. I think we all know how this is going to work out.

IKEA didn’t have any of the fabric. They had a sample hanging on the wall they couldn’t sell me, but the shelf was empty.

They did have the same fabric in beige, red, and white. As it was the lapels I needed the extra fabric for, I considered making it with a different color and going for a snazzy, two-tone effect, but then I realized that the accent color would be, as I said, beige, red, or white. None of those sounded like they’d work well with blue. The red in particular seemed like it would be a crime against the eyes of anyone who looked at the finished suit.

Also, in formulating the idea, I had used the word “snazzy,” which is never a good sign.

I ended up buying the beige, figuring I’d cannibalize the blue fabric pieces I’d already cut for the pants to make the lapels, then I’d make a pair of pants out of the beige fabric. That would leave me with a mismatched jacket and pair of pants, but they’d both be usable garments (hopefully) and I’d still get the practice of making a full suit, even if I don’t end up with one. 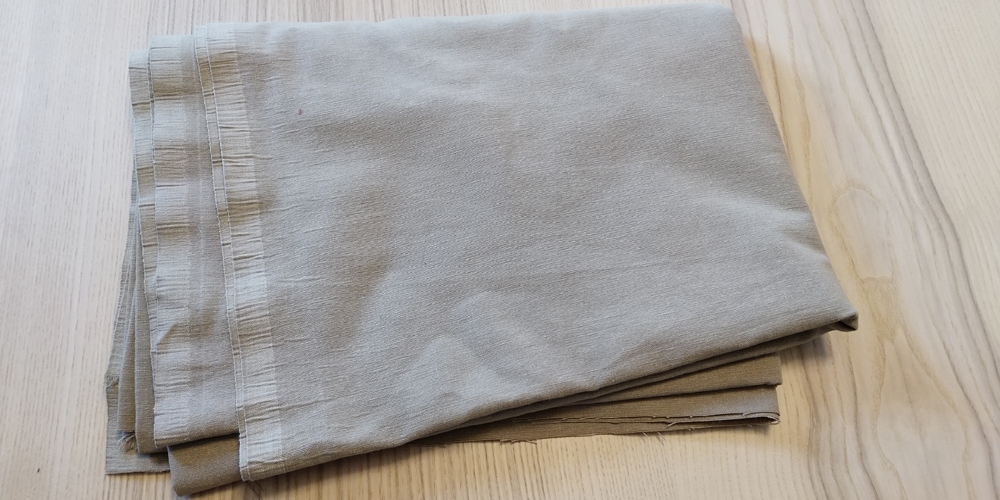 I also decided to just make the jacket in its entirety then move on to the pants, knowing that I might be able to buy more of the blue fabric later. There was an excellent chance that I’d end up back at IKEA again before I was done with the jacket. IKEA’s like the grave. Few of us plan to go there anytime soon, be we all know we’ll end up there eventually.

I came home, put the beige fabric away in a futile attempt to hide my shame, and cut my lapel pieces out of what had been the back pieces of the suit pants. Good times.

The next steps were to cut out the lining and begin the preparation of the canvas.

As you may remember, most linen suits are unlined. I, however, needed to line this one in order for it to serve its purpose of giving me the practice I needed to make the final suit later. I selected a light, silky, synthetic material meant for what these days are called “performance polo” shirts, but used to be called “shiny golf shirts.”

Cutting the lining was easy enough. I just used the existing suit pieces as a pattern and cut a corresponding piece of lining for every piece of the outer shell, because, when you think about it, the lining is just a second jacket worn inside the outer jacket. 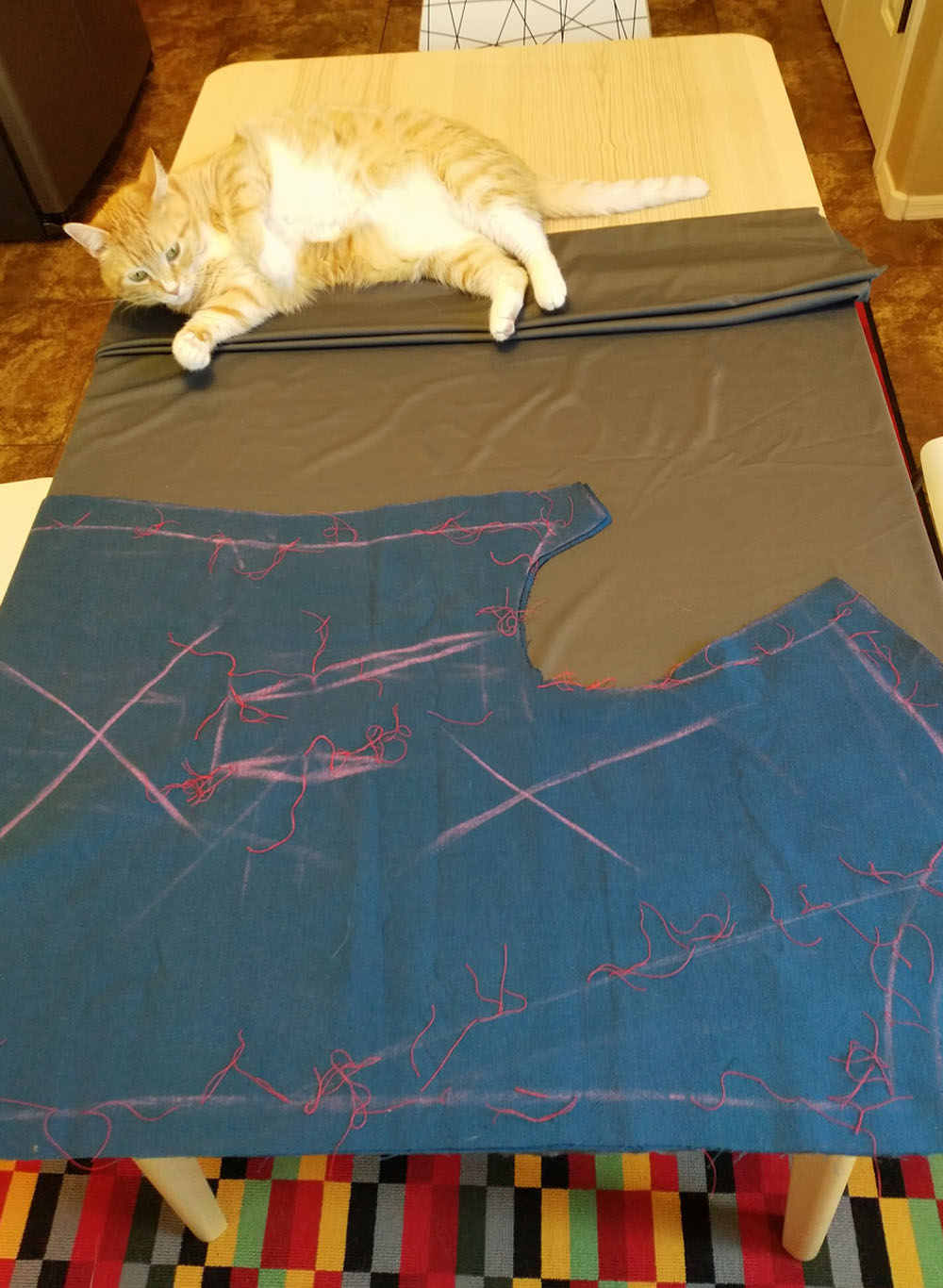 I predict the entire final post to this blog will just be an endless description of me burning through several lint rollers trying to remove cat hair from the finished suit.

I do still need to cut the canvases, but before I can do that I have to pre-shrink the canvas, which means soaking it in water. As I understand it, most professional tailors do this in a sink. I didn’t want to tie up one of our sinks for several hours. Luckily, one of the upsides of cat ownership is ready access to plenty of buckets, all of which are marked “Tidy Cat.” 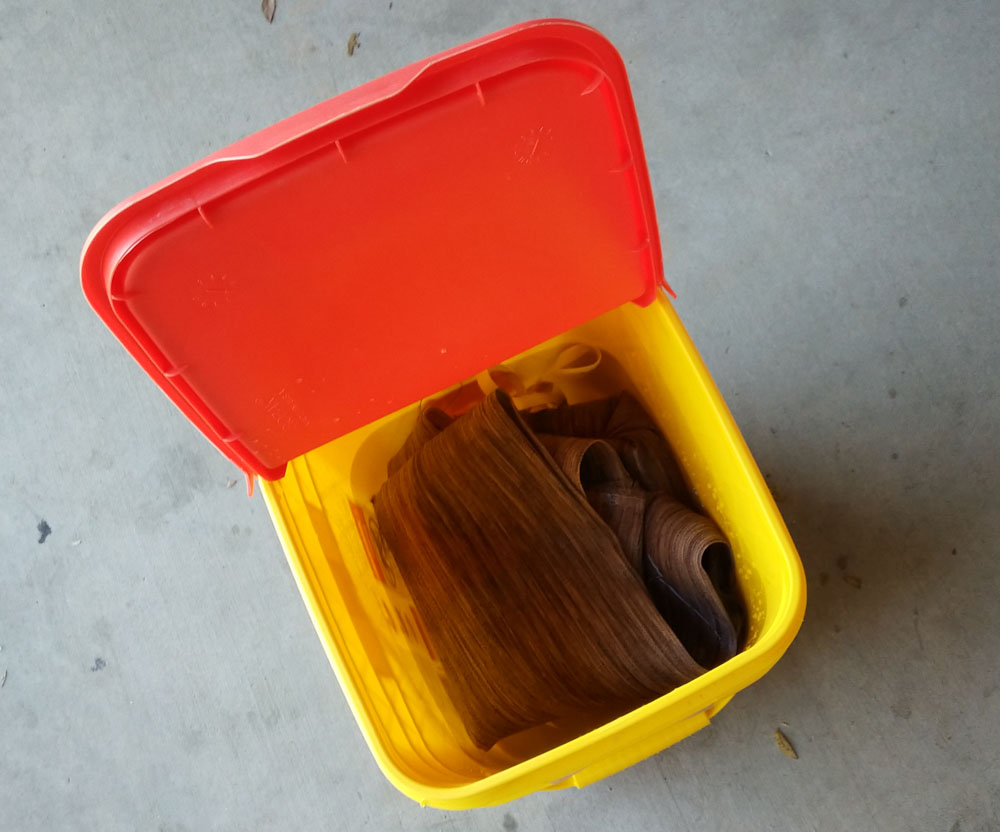 It’s a glamorous business, to be sure.

The canvas went into the (cleaned out) bucket, water went in after it, and the whole thing went out to the garage for a few hours.

Okay, that’s nearly a thousand words. True, most of them were about IKEA, but I think that’s enough for a week. Please join me next week, when we’ll begin work on the canvas, the thing that separates a hand-made, bespoke suit from a factory-made job.