First, let me explain the title of this post. I have been known, from time to time, to talk in my sleep. One night, not long after Missy and I got married, I woke her up in the middle of the night by saying, “Pants, baby! Pants!” The next day I had no recollection of any dreams, and I can’t think of any scenario that would cause me to string that exact sequence of words together with that kind of enthusiasm, so it, like many of the things I’ve done, remains a mystery.

Now then, on to business.

Part of the reason I’ve always been interested in bespoke suits is that I am a Meyer, and am shaped in the traditional Meyer manner, meaning I am “stout,” with a long torso and short legs.

Make them all bald and replace the axe with an accordion and you’d have a picture of my uncles, and a couple of my aunts.

I expected my pants pattern to come out looking a bit odd. It’s custom made from my measurements, how could it not?

The panels each start at the waistband with a width roughly one quarter your waist circumference, then flare out slightly, and taper down to the ankle, with a width about a quarter of the desired cuff circumference. The crotch manifests itself (there’s a phrase I didn’t anticipate ever writing down: The crotch manifests itself) as a J-shape which is more pronounced on the rear panels than at the front, because most people are . . . more pronounced at the rear than at the front. 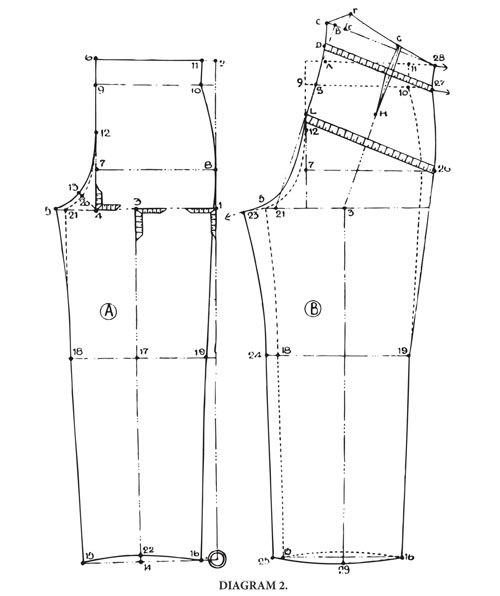 When I started drawing up the pattern I ran into a serious problem. Lines that were supposed to be shorter than other lines came out larger. I double- and triple-checked my math, but it kept coming out the same. Of course, I suspected what this might mean, but I struggled against it mightily, scouring the book for any directions for how to alter the basic pants pattern for this specific situation.

In the end, I had to give in to the inevitable and use a different pants pattern, the one detailed under the following heading:

In addition to using this pattern, I also immediately declared myself to be on a diet. Any time I’m tempted to cheat, all Missy has to do is say “corpulent,” and I make a more sensible dietary choice.

Also, I started doing my daily writing on a laptop bungee-corded to the console of a treadmill, so if the characters in my novels start talking a lot about walking, or complaining about aching feet, you’ll know why.

All that said, the pattern “For the Corpulent Figure” did handle my measurements pretty easily. Almost as if the pattern were designed for people like me. It’s funny—solving a problem usually makes me feel better, not worse. 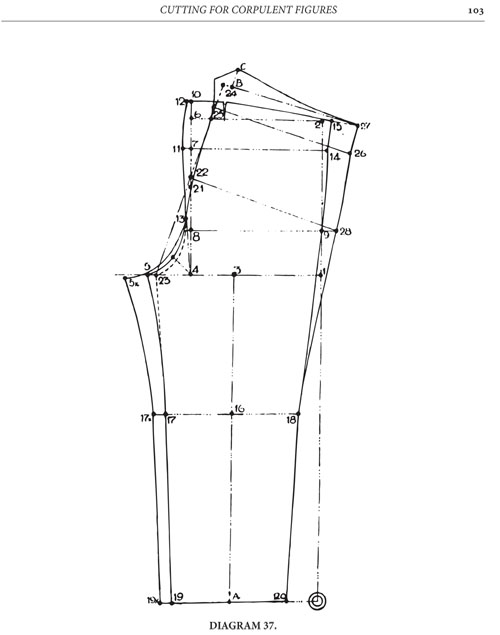 Here it is, the pattern that saved my project and made me face the unpleasant truth. I’m both grateful to it and resentful of it, a set of emotions most people reserve for their parents.

That photo’s file name is “Corpulent2,” by the way, which would make a great name for an early ’90s Hip Hop duo.

We’re right up on you like a virulent flu!

We’ll rock the mic no matter what you do!

Once the pattern was complete, my standard operating procedure required the construction of paper pants. I think it’s fair to say that I was still a bit off my game. In the interest of demonstrating once again what kind of genius I am, let’s see if you can spot the mistake in this photo of the construction process. 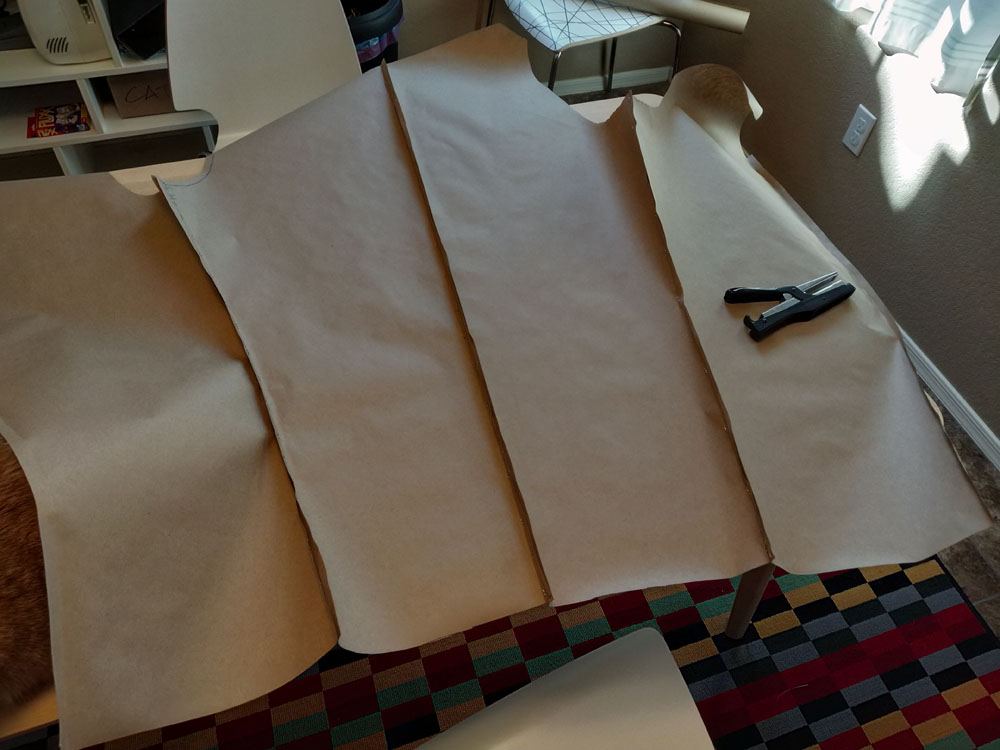 The mistake is subtle, but I promise, it is there.

That’s right, I stapled all four panels together, resulting in pants with one big leg. Luckily, I own a staple remover. 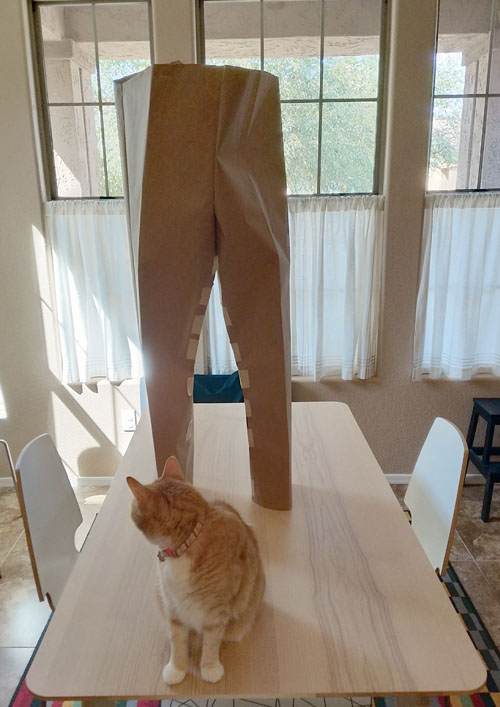 The cat’s thoughts: “I don’t know what’s more disturbing, that there’s an invisible man standing behind me, or that he isn’t wearing a shirt.”

I also, while I had all of the stuff out, used a different set of instructions to make a sleeve pattern, and this one came out looking a little more sane. Before I show you the photo, I’ve been told that including an oversized novelty quarter is not the best means of giving the reader a sense of scale in a photo, so I have replaced it with something I hope will be more effective.

I made the paper sleeve and mounted it on the empty arm hole of the paper jacket. 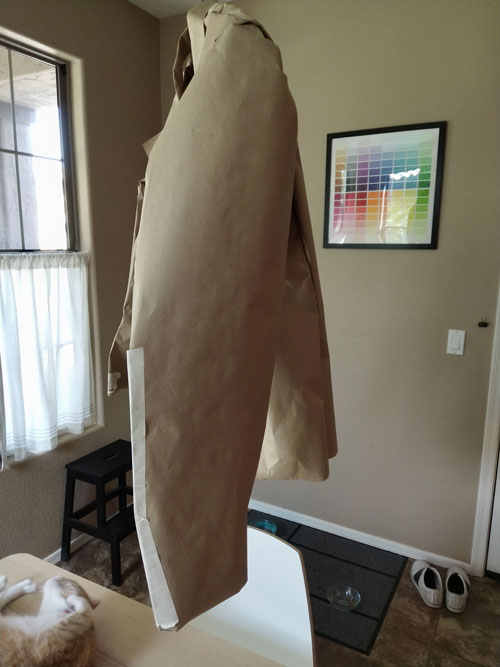 Again, the mistake is subtle, but undeniably there.

Yes, I accidentally assembled it inside out, then hung it on the jacket backward, and didn’t notice until it was on the jacket and my wife was laughing out loud. I prefer to focus on the positive, which is that I’m ready to start cutting fabric! Come back next week for that. I don’t see how it can possibly go wrong.