Up until this point, I had been keeping my various sewing tools, spools of thread, and related bits and bobs in two or three different storage bins, stored in various different areas around the house. Every time I started work on the project I’d first have to walk at least two full laps of the house, gathering the specific things I would need for the day’s activities. The cat never failed to notice this, and by the time I was ready to actually start work, would usually be waiting at the dining room table, ready to “help.” 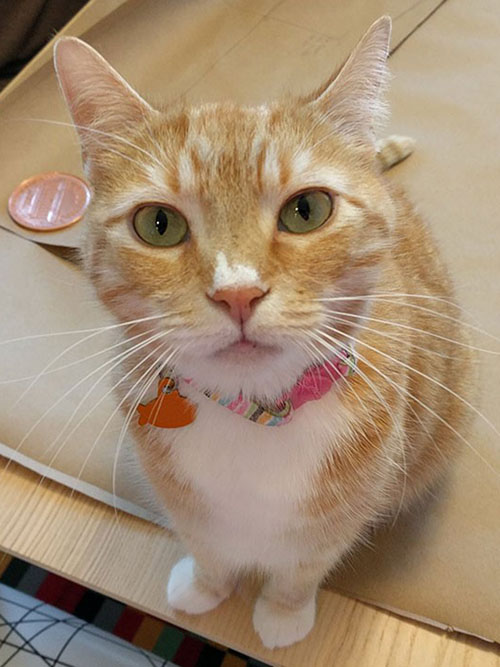 I decided it was time to get some sort of carrying case to store my sewing stuff. Something that would keep it all in one place and make it easy to carry while, hopefully, not rousing the interest of the cat.

I went to the sewing store and found that I could get a “Sewing accessories organizer” the size of a large pencil case, made of surprisingly thin plastic, with a fuchsia handle and latches for just over thirty dollars.

I suspected I could do better.

I went online, looked over the offerings of the Stanley Corporation, and for twenty dollars, I bought this bad boy. 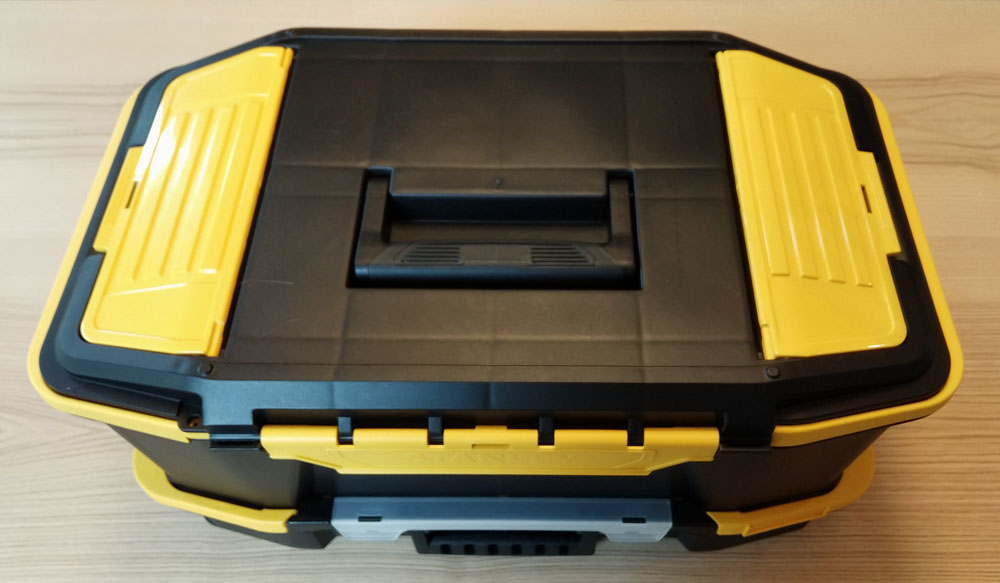 Overkill, or the exact right amount of kill? You decide.

It’s huge. It’s manly. It’s full of little compartments and cubby holes to organize things in and forget where I put them. And as you can see, it came in Batman’s color scheme.

For those unfamiliar with Batman, here’s a picture of him, with an oversized novelty penny, for scale. 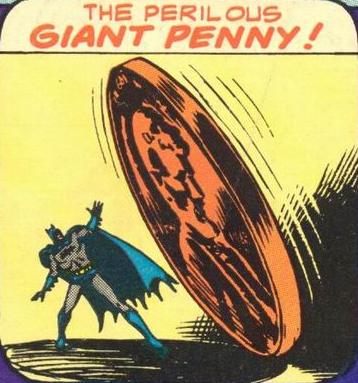 As for keeping the cat from becoming interested, this photo was taken less than ten seconds after the previous one. 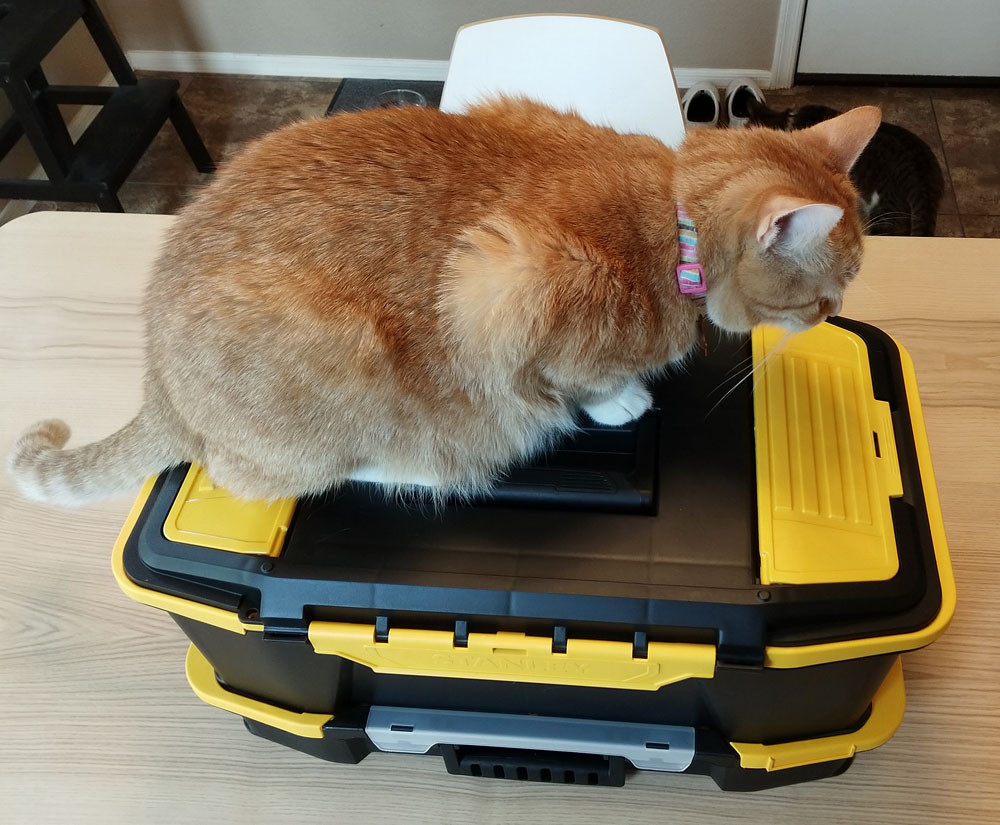 But you didn’t come here for a toolbox review. You came here for the next step in the suit-construction process.

The canvases are, as I’ve said, one of the things that separates a high-quality bespoke suit from a factory-made, off-the-peg suit. The front of a jacket isn’t just a couple of layers of fabric. If it were, a suit jacket would hang just as flatteringly as the lab coat your local pharmacist wears. No, a good jacket has structure, a foundation, and extra material designed to give the jacket a specific shape and help it hold that shape.

In a cheap jacket, this is done with “fusible interfacing”: material impregnated with glue that is permanently bonded to the inside of the jackets front pieces, giving the jacket heft and body. Fusible interfacing is cheap and easy to work with in a mass-production setting. The downside is that it gives the jacket a stiff look, causes the lapels to bend at a single point and a hard angle instead of draping naturally over the wearer’s ribcage, and often will cause unsightly rippling in the material after repeated dry cleanings. (Sometimes after the first dry-cleaning.) 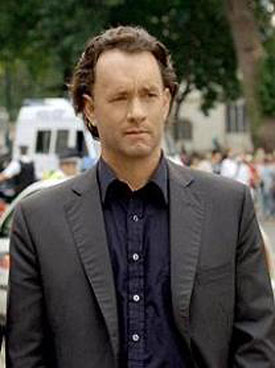 Most people were too distracted by the awful hair to notice the awful suit. (Image Source: Deadline.com)

Canvases, on the other hand, are sewn into the jacket front pieces, not glued, and are designed to float freely within the suit, causing the jacket to stretch and drape, instead of bending. Also, as the canvas is made of materials that will change shape with wear and body heat. A fully canvased suit is said to actually fit better and become more flattering over time.

The canvas consists of three parts. The first part of the canvas is made of . . . canvas. 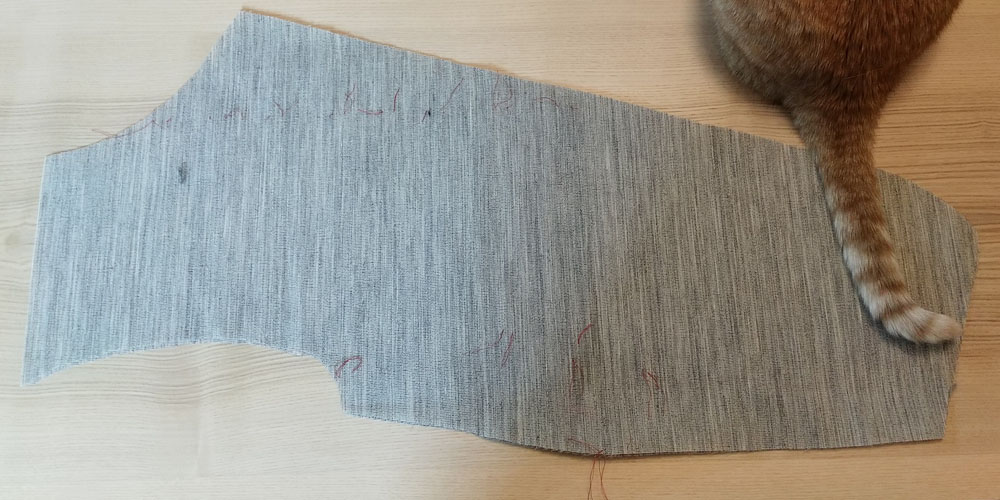 Not that you’d want to use it as a tarp. (Note: The red threads mark the lapel line and the locations of the darts.)

It’s a stiff material made of cotton fibers and horse hair in a bespoke suit. For the inexpensive test suit, I decided to use a partially synthetic canvas, just so I can compare it with the natural canvas I got for the final suit.

The canvas runs all the way from the shoulder of the front piece to the bottom hem of the jacket, and out into the lapel.

In order for the canvas to give the suit shape, the canvas must have shape itself. The first step to giving the canvas shape is to cut in some darts. Three of them. A diamond-shaped one at the waist, a wedge-shaped one at the armpit, and a slit in the shoulder that doesn’t show up well in photos yet. 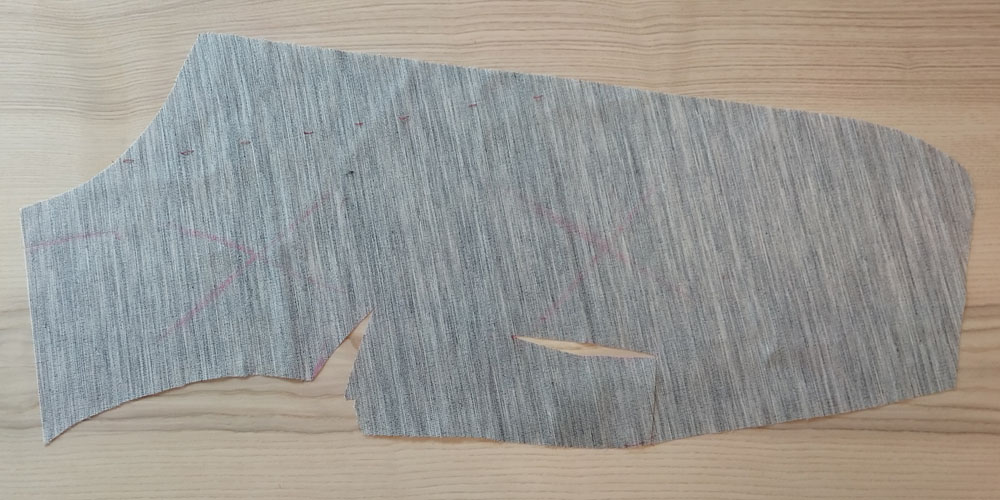 I know it doesn’t look like much now, but in the finished suit it’ll be completely invisible, so that’s fine.

Next you cut several strips of heavy cotton material.

Cotton strips, shown with a oversized novelty penny, for scale. 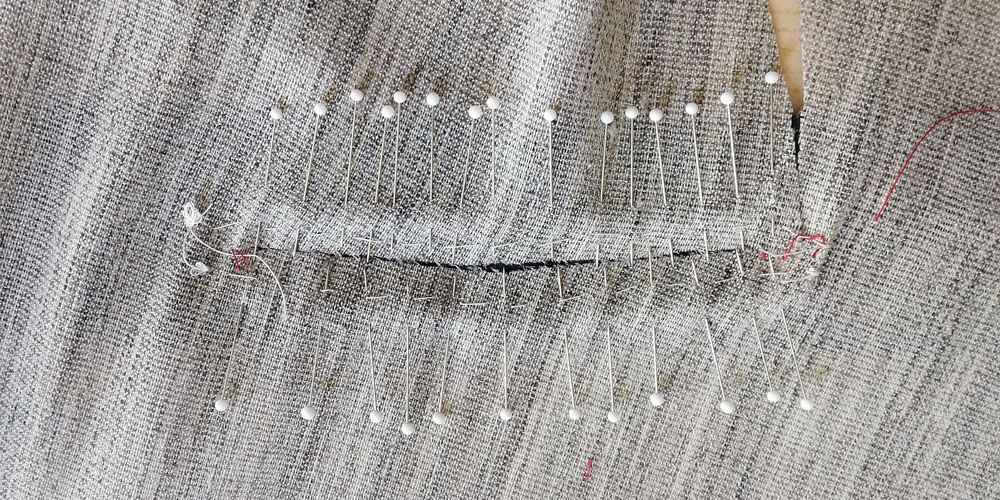 One dart, pinned and basted.

With the dart pinned shut and basted shut, you then sew the dart, which will hold it shut. If you’re a skilled tailor, you might do this by hand. I used a machine. Once the dart is sewn shut, you remove the pins and the basting, because we wouldn’t want to overdo things.

That deals with the diamond and wedge darts, but what about the slit in the shoulder? Well, it’s a funny thing. Instead of making the canvas smaller in places, as the other two darts did, the slit makes it larger. Instead of cotton, you take a piece of the canvas material and follow the same protocol as you did on the other darts, only instead of pulling the sides of the dart together, you push them farther apart. 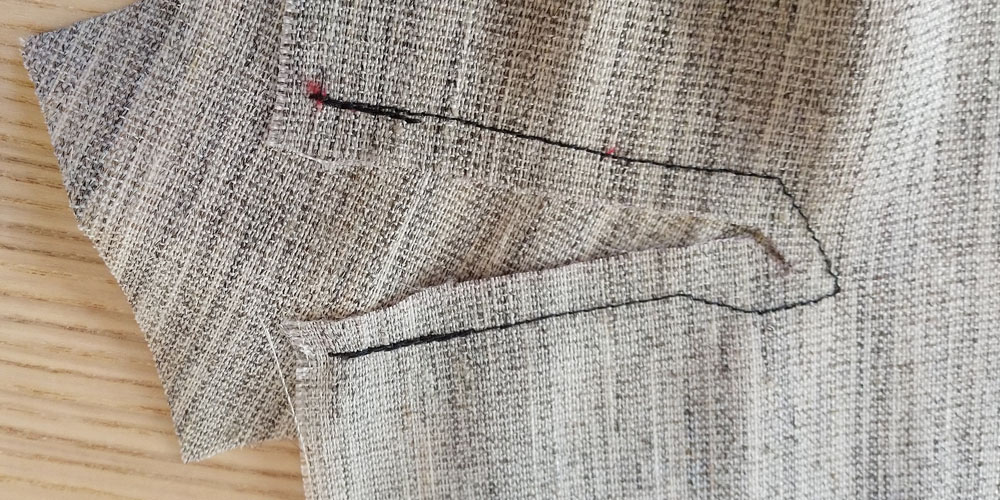 The little turn-down at the end of the cut kinda makes it look like a mouth that’s saying something sarcastic.

Once all of the sewing is done you trim the excess cotton and canvas away from the darts and you have the first part of the canvas complete. Only two more to go, then all three pieces for the other side. Once all of that’s done you can join them together, which is actually the hard part.