In our last thrilling episode I had drawn up a pattern for the front and back pieces of my suit jacket, decided it looked wrong, scrapped it, and drawn up a second pattern I was much happier with. The next step is to make the patterns for the sleeves, and then the collar, both of which are built off of measurements taken from the pattern for the front and back of the jacket.

I don’t know a lot, folks, but I know me. One thing I can tell you about me is that it’s always worthwhile to double check my work. So, before I went on to possibly compound any mistakes I’d made, I decided to transfer the pattern to cheap cloth (muslin, a flimsy white cotton material that’s often used for this very purpose), quickly sew it together, and try that puppy on. This would allow me to test the pattern, practice a few “skills,” and generate some unflattering photos for the blog. It was a win-win-win.

First, I cut the excess paper away from the pattern. 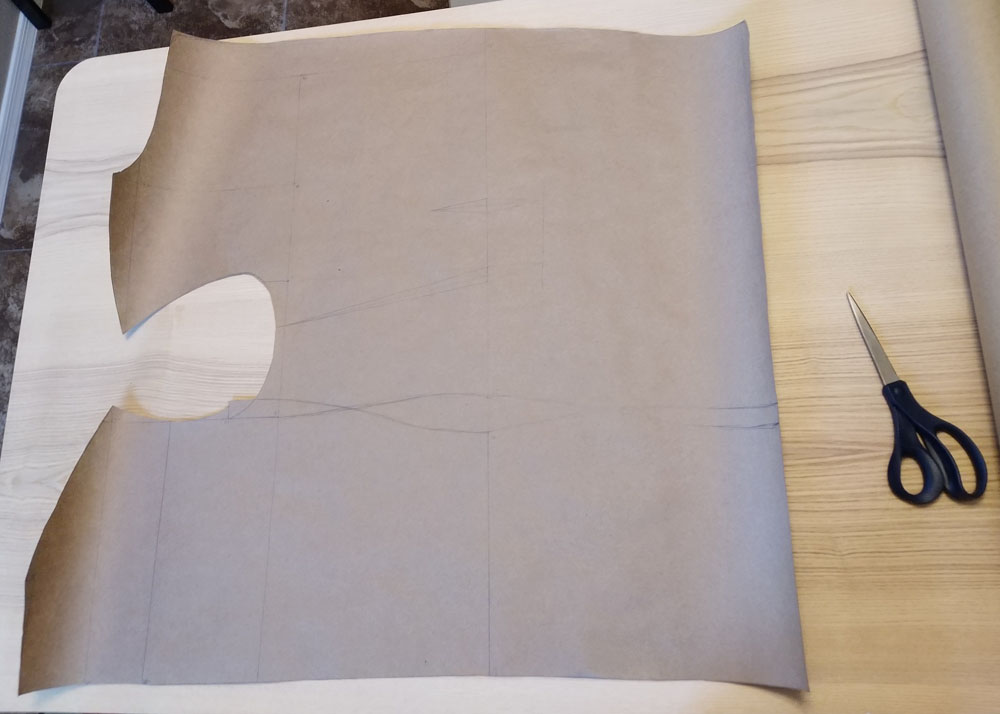 All that attention I paid in kindergarten finally pays off!

Drawing chalk lines around the outer edges of the pattern was easy enough. You’ve probably noticed that the back of the front pattern and the front of the rear pattern overlap, which makes it difficult to cut them apart, and harder to draw lines around. I did some research, and one way to deal with this problem is to transfer the pattern to the fabric using “Tailors Tacks,” essentially loops of red thread that you put through your pattern and the layers of cloth along the line you wish to transfer. You then cut the thread between the stitches. Which looks like this. 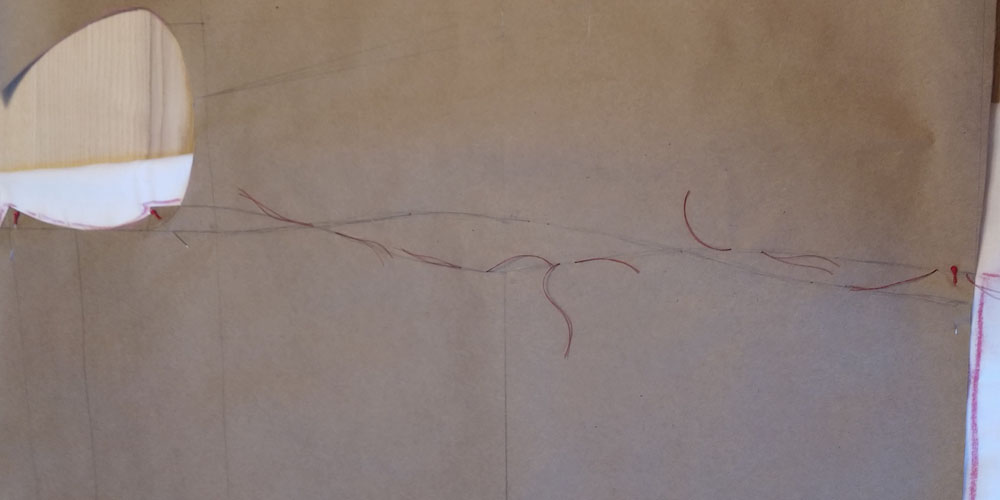 I went a little sparse with the tacks.  A seasoned pro would have probably done a lot more of them, but I made up for it by making the individual tacks larger. That works, right? Right?!

Then you pull the pattern off of the fabric, and as you pull the layers of fabric apart, you carefully snip the threads between the layers. In the end, you have two pieces of material marked in the exact same spots with highly visible pieces of thread. From there, it’s simple enough to connect the dots.

And when you’ve done with the tacks, and you’ve cut out the fabric, it looks something like this. 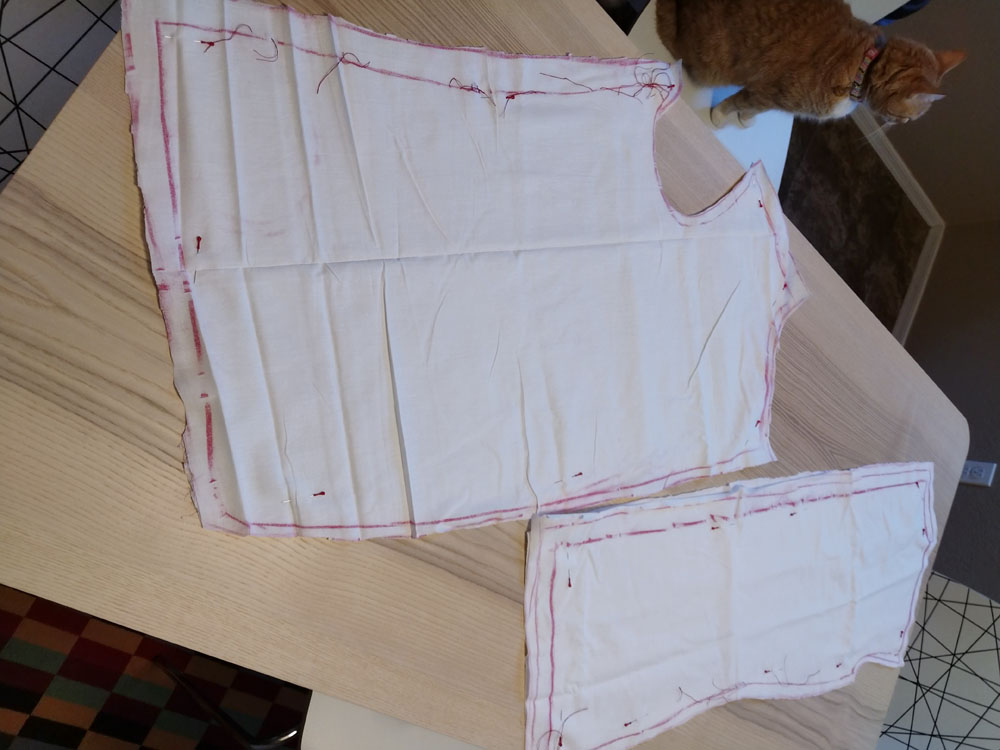 It may be too subtle for you to notice in this photo, but I did not iron the muslin before marking and cutting it.

So, I sewed the pieces together and tried them on. 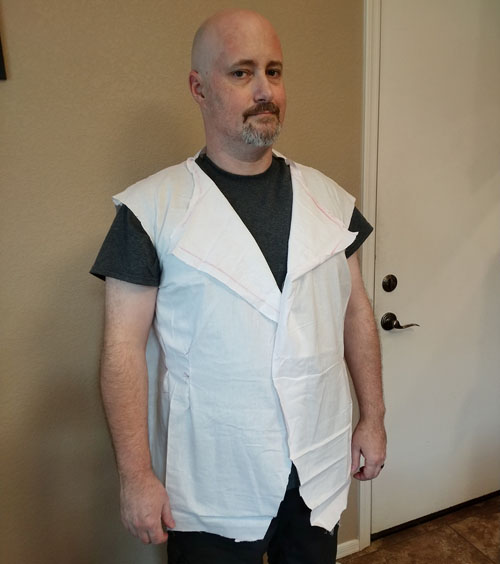 Oh, I cut a dashing figure.

Overall, it was at least passably jacket-shaped, but I wasn’t happy with the cut of the front edge. The more pressing problem was the armholes. They were far too small. If you look, you can see that even in this unlined, single sheet of muslin, there are lines coming up from the armpits (Or scye-pits  . . . I suppose), meaning that my arms were pulling the shoulders down.

Part of me was tempted just to take scissors to the pattern, expanding the armholes downward, and get on with my life. I call that part of me “the stupid, lazy part.”

Instead, I literally went back to the drawing board. At least I didn’t have to do it alone. 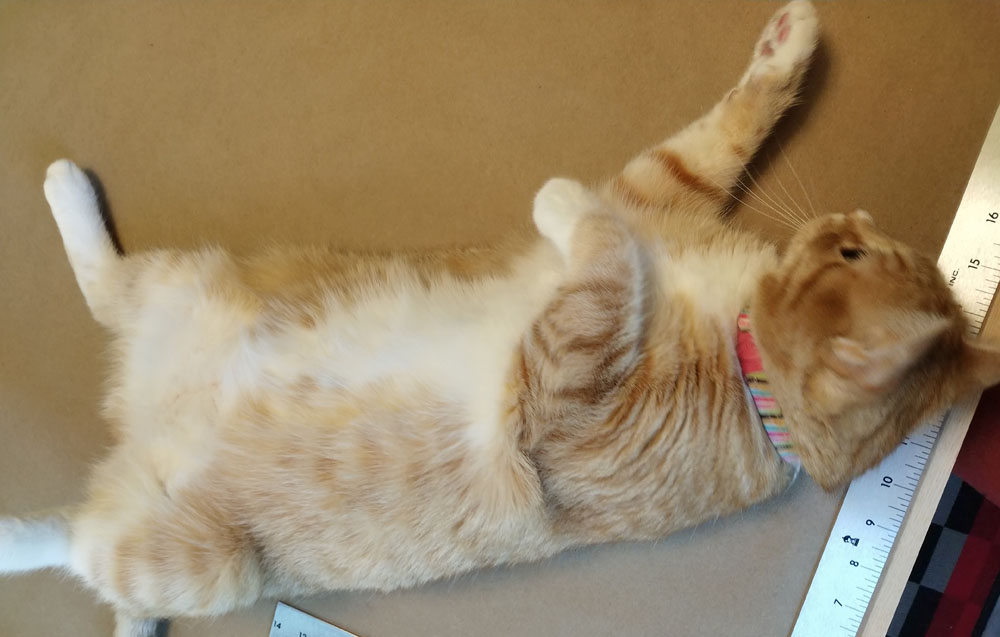 Yes, I had to draw up a third version of the pattern. This time I used a different method of determining my depth of scye, a method that is less precise but errs on the side of giving more room, not less. I drafted a new pattern and cut it out. Sadly, I was out of muslin. I could have gone out to buy more, but I’d been kind of rude to the stupid, lazy part of myself earlier, so I decided to give it a win this time, and instead made my new test vest out of paper. 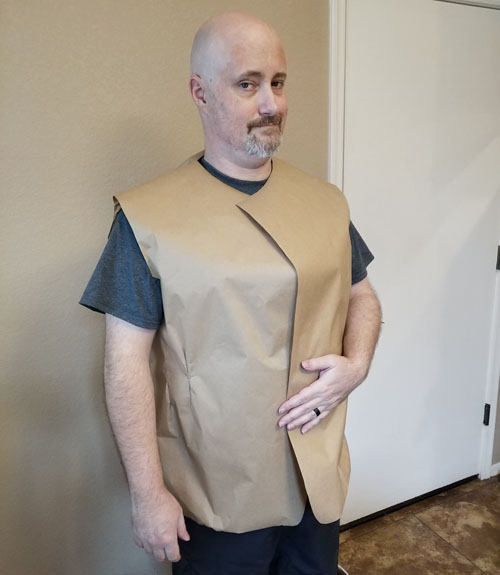 As you can see, there was no pressure on the armholes. I was in big-scye country! (“I’ve been leading up to that joke for weeks, and I have no regrets!)

Now I could move on to the collar and the sleeves. A folded flap of fabric and two cloth hoses for my arms to go in. Clearly, the hard part was behind me, and it would all be smooth sailing from here. (Was that foreshadowing not obvious enough? It doesn’t go well, in case you didn’t pick up on that.)