I am now the owner of several yards of charcoal gray virgin wool. All of my information sources agree that the next logical step is to pre-shrink it.

Pre-shrinking the fabric helps prevent having your suit shrink when you have it dry cleaned, or if you get caught in the rain, leaving you looking like a post-transformation Incredible Hulk. It seems to me I saw that happen in a Bugs Bunny cartoon, but I was unsure that it could occur in real life. There are so many things that happened in those cartoons that seemed unrealistic; cars driving out of painted-on tunnels, metal birdseed rendering birds magnetic, very poor people tucking a napkin into their collar before eating a boot (In case they spill some boot on their shirt, presumably).

Every information source I had agreed that the best way to pre-shrink a large bolt of wool is to pay a dry cleaner to run it through their steam press. I liked the sound of this for two reasons.

One: it meant that someone else would do all the work.

Two: it involved experienced professionals using a large piece of industrial equipment to do all of the work. 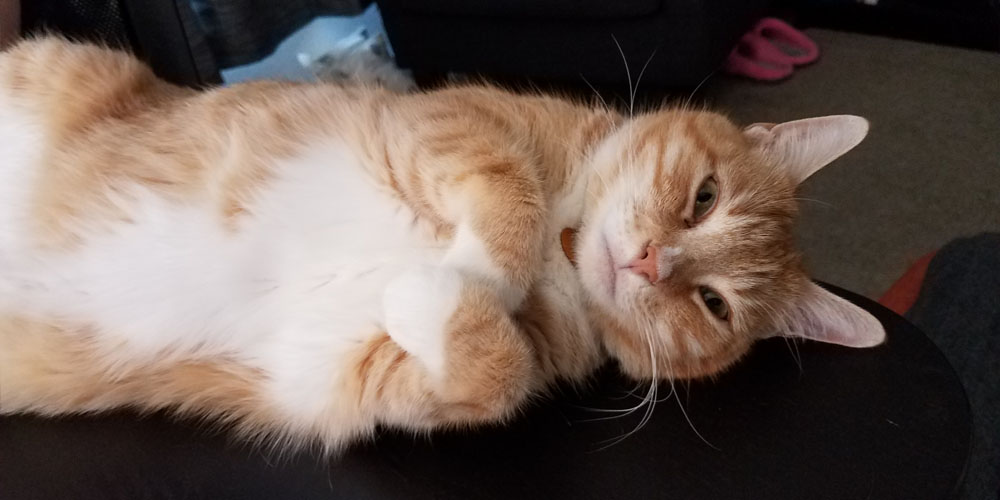 Since this post is mostly about me talking on the phone and doing research on the web, there are no pertinent photos to share. I am going to put up cute pictures of our cats instead, because I know how the internet works.

I pulled up Google Maps and plotted all of the dry cleaners in my area, comparing their proximity to my home and the number of positive reviews. I picked the likeliest looking place and called them.

I explained that I had a large bolt of wool I wanted them to steam press to pre-shrink. The employee who answered told me I should talk to the manager. I asked to speak to the manager. He said that she wasn’t there, but that she was at their other location, and gave me the phone number.

I called the other location.

I asked to speak to the manager. She wasn’t in, but the employee said she’d be in the next morning. I thanked her and said I’d call back then. She interrupted me, asking for my name and phone number.

I said “That’s not necessary. I’m happy to call back.”

She said, “No, no, no! I just gave you some information, so you gotta tell me who you are, man.”

This is not a rule I was aware of, but I figured that times are what they are. This is a young woman; the manager is a woman. I know what kind of stupid things stupid men sometimes do. She could have been more polite about it, but if it made them more comfortable to have my name and number, I wasn’t going to argue. I gave her my information.

The next day I called back (they did not call me). I spoke to the manager and explained what I wanted. She said, “We can’t do that.” 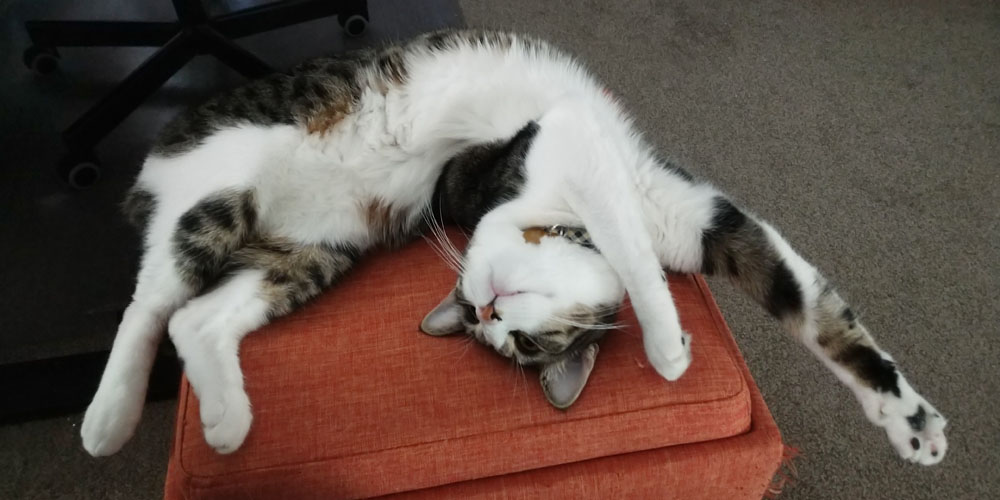 When we see our other cat in this posture, my wife and I usually say, in a loud, theatrical tone of voice, “Well, I don’t see how this could possibly be a trap of any kind!”

The next place asked that I bring the fabric in so they could look at it before they committed to being able to do the job or not.

The next said they couldn’t do it. 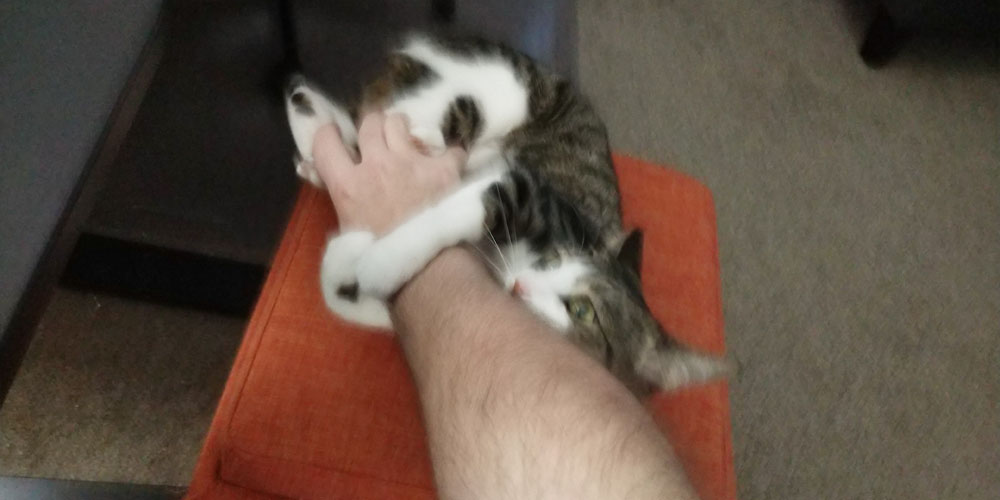 Then we reach down to pet the cat’s belly, and THE TRAP IS SPRUNG!

At this point, I started researching methods to pre-shrink the wool myself.

One method is called “The London Shrink” (which sounds filthy). You roll the fabric up with wet bedsheets, seal it in a plastic bag, and let it sit for twenty-four hours. Afterward, you lay the fabric out flat and let it air dry.

Once the fabric is dry, you steam press the wool manually.

To steam press the fabric manually, first you lay the bolt out flat. Then you soak a smaller piece of white cotton cloth in water and place the wet fabric out flat on the wool. Now you take a hot iron and press straight down through a damp cloth until all of the water in the cloth directly beneath the iron has evaporated, leaving an iron-shaped dry spot in the cloth. When that’s done, you move the iron one iron-width to the side and do it again. When the entire wet cloth is dry, you re-soak it, put it down one wet-cloth width over, and start the process over. You keep this up until you’ve pressed every square inch of the wool, all seven yards of it.

There is a less labor-intensive method. You put the bolt of wool in a clothes dryer with a bath towel that is soaked, but not dripping, with water. Run them together, on high heat, for 40 minutes. If the wool is still damp at all after that, lay it out flat to dry.

Once the wool is dry, you steam press it manually, exactly as you would have after performing the London Shrink.

After quite a bit of Googling, I found a third, even less labor intensive method. You don’t have to bother with wet sheets, wet towels, or the clothes dryer. You just jump straight to steam pressing the wool manually.

Now despondent, I called another dry cleaner. I explained that I had a large bolt of wool I wanted them to steam press to pre-shrink it. The woman who answered the phone thought for about five seconds, then said, “Oh, like we’d do with a tablecloth.”

At first, I was taken aback by the idea of anybody treating my bolt of virgin wool like a tablecloth, but when you think about it, it makes sense. Any piece of fabric can be a tablecloth. It’s not a function of what the material is made of so much as what it’s draped over. Take a sheet of that gold foil heat shielding from the Apollo moon landers, drape it over a table, you’ve got yourself a shiny gold tablecloth.  (Someone should tell the president that idea. He might raise NASA’s budget.)

The dry cleaners’ storefront was a small slot in a strip mall simply marked “Cleaners.” When my wife and I came in, the woman behind the counter made eye contact and smiled, and the customer she was talking to scowled at us like we were intruding.

When it was our turn, I reminded her of our conversation and put the folded pile of wool on the counter expecting her to look at it and announce that they couldn’t help me.

She looked at the wool and said, “It’ll be done Saturday after two, but I suggest you come get it Monday, just in case there are any delays.”

I went in Monday, fully expecting the wool to have been ruined somehow, or to hear that they couldn’t steam press it after all. Neither of those happened. The fabric looked great, obviously had been processed somehow, and was ready to go. 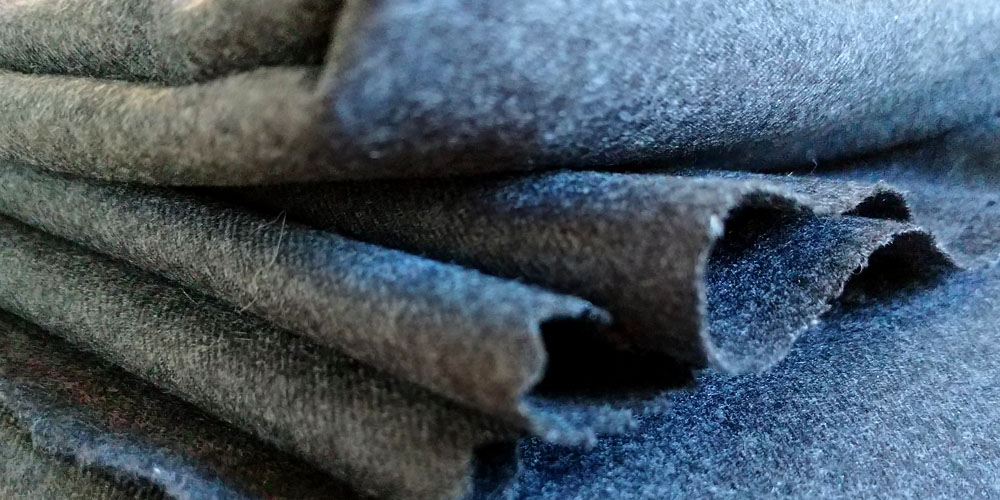 So there it is; the first (and probably only) piece of useful consumer advice you’ll get from this blog. If you need to preshrink a large bolt of fabric, tell them it’s a tablecloth.