Now that I had purchased my materials, procured or made the special tools necessary for the project, and found the instructions I needed to create my pattern, all that was left was to start work on said pattern.

That’s right, after all this time and effort, I was finally going to make a thing!

I figured it would be smart to prepare by running through the instructions a few times, just to make sure I knew what I was doing. I also decided that I would make my experimental practice patterns in Adobe Illustrator. That way I could easily undo any mistakes, and I could do the entire job while sitting in a chair with a cold drink and a snack.

Only when I was pretty sure I knew what I was doing would I move on to making a full-size pattern on paper, using the last two special tools I procured: a yardstick and a tailor’s square. 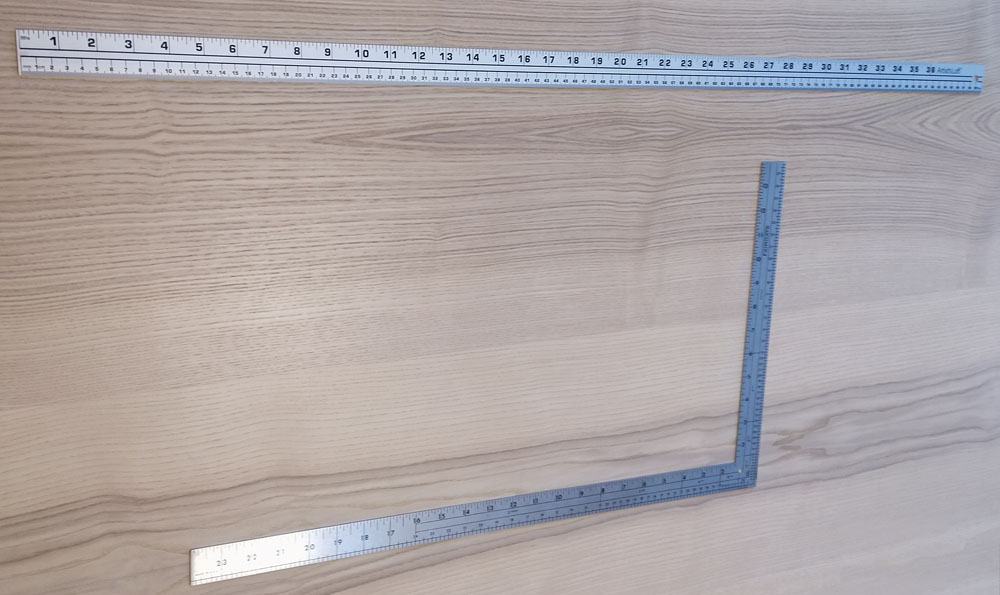 I considered photographing them next to the giant novelty quarter to give you a sense of scale, but then I realized that you know how big a yardstick is.

The ancient textbook I chose to use has several different sets of instructions for how to craft a “lounge suit.”

Have I mentioned that that’s what I’m making? A “lounge suit”? Yeah, it turns out that what most Americans would call a “business suit,” or just a “suit,” is, in fact, a “lounge suit.” I assume it was originally designed for hanging around a lounge, or perhaps for lounging around … a lounge. The idea that there would be a prescribed uniform for lounging and that said uniform involves a shirt, tie, and matching pants and jacket shows that the English of the 1800s were even more dedicated to formality than I’d imagined. It turns out that Lord Grantham on Downton Abbey was actually pretty laid back, comparatively. He was the Edwardian equivalent of “The Dude.”

Anyway, the book had multiple lounge suit drafting systems to choose from. I picked the first one and started a test draft using the sample measurements the book supplied.

An hour in, I got completely stuck at the exact same spot where I’d been stopped when I tried “The Thornton System.” (See last week.) I gave up, slunk away, and drank to forget. 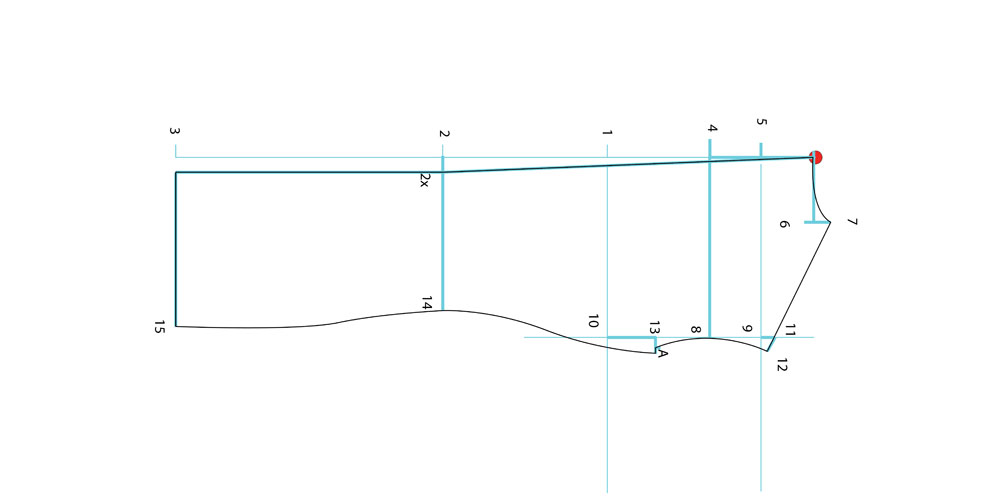 I only seem to have trouble making the front. The front of a jacket’s not that important, is it?

The next day, I tried again with one of the other lounge jacket systems in the book, this one labeled the “West End” model. Reading the preface to the section, I pieced together that by West End, they essentially meant Savile Row and its immediate area (At one time Savile Row was such a going concern that it supported too many shops to actually fit on the row. There were shops spread around the adjacent blocks that were considered part of the row, even if they weren’t technically on it.)

I sat down again with the test measurements and Adobe Illustrator. I fought my way through, teaching myself concepts such as “Working scale,” and deciphered arcane language like “Measure the distance from A to E. Now put that number on X and continue to 13 inches.” I’m sure to some of you, that was perfectly clear. I was often quite confused, and Google translate doesn’t have a setting for “Old Timey Technical Jargon.” It was slow going. Eventually though, to my surprise, I got through the entire set of instructions. 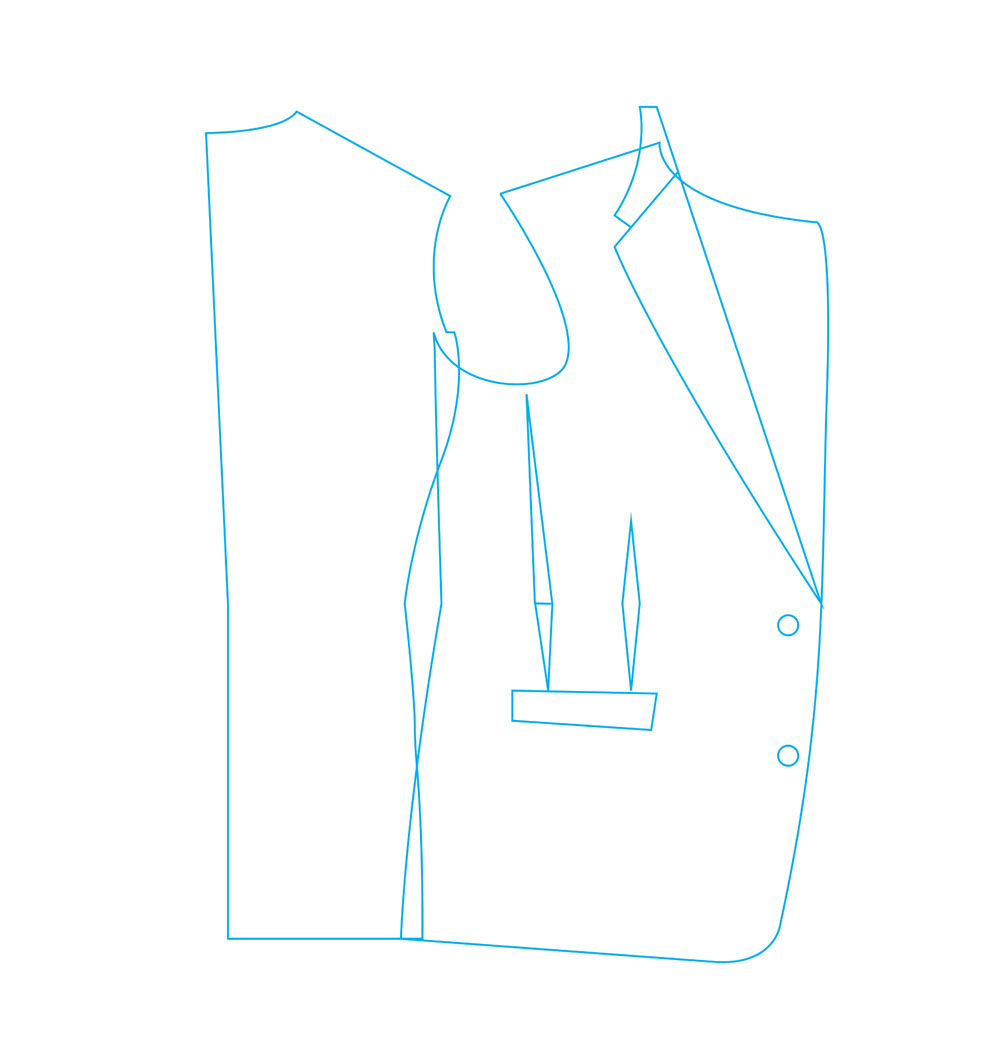 Of course, I had only successfully rendered the pattern for one portion of a jacket, not a full suit. I moved on to the instructions for the sleeves, the collar, and the pants. It took some doing, but eventually, I completed those drafts as well, leaving me with an Illustrator document that looked like this: 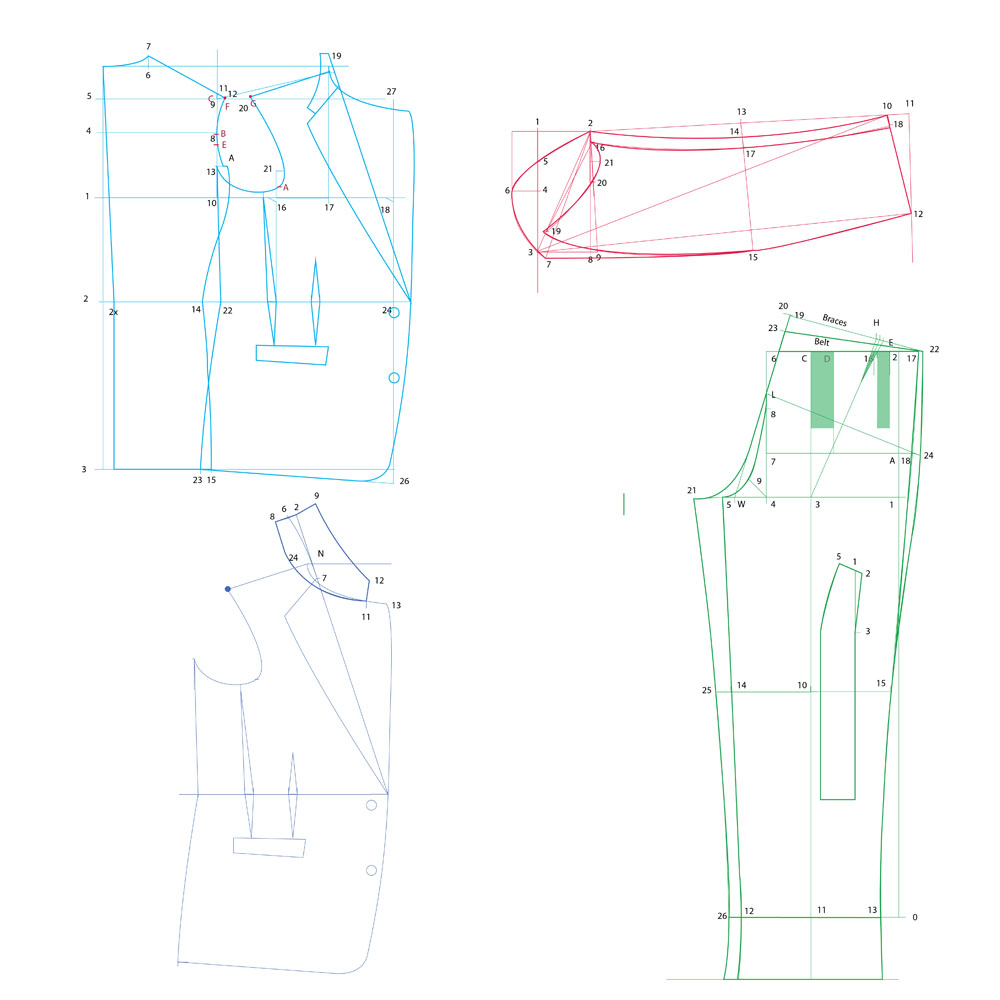 Being the intensely rational and practical person I am, the only course of action that made any sense was to use my miniature pattern to make a tiny paper suit.

I simplified the illustrator image, removed the underpinnings and left only the useful patterns, which I laid out on separate sheets and printed. 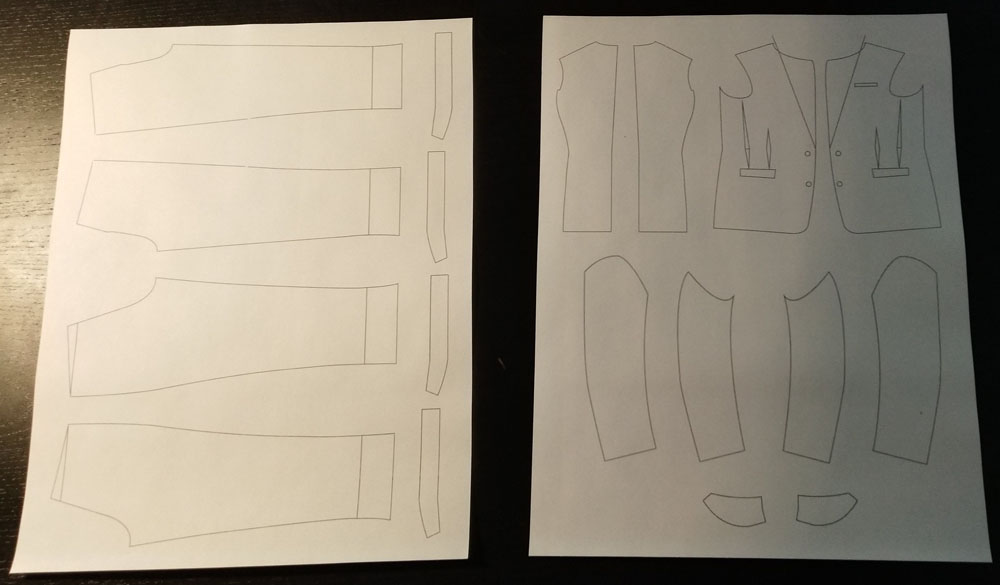 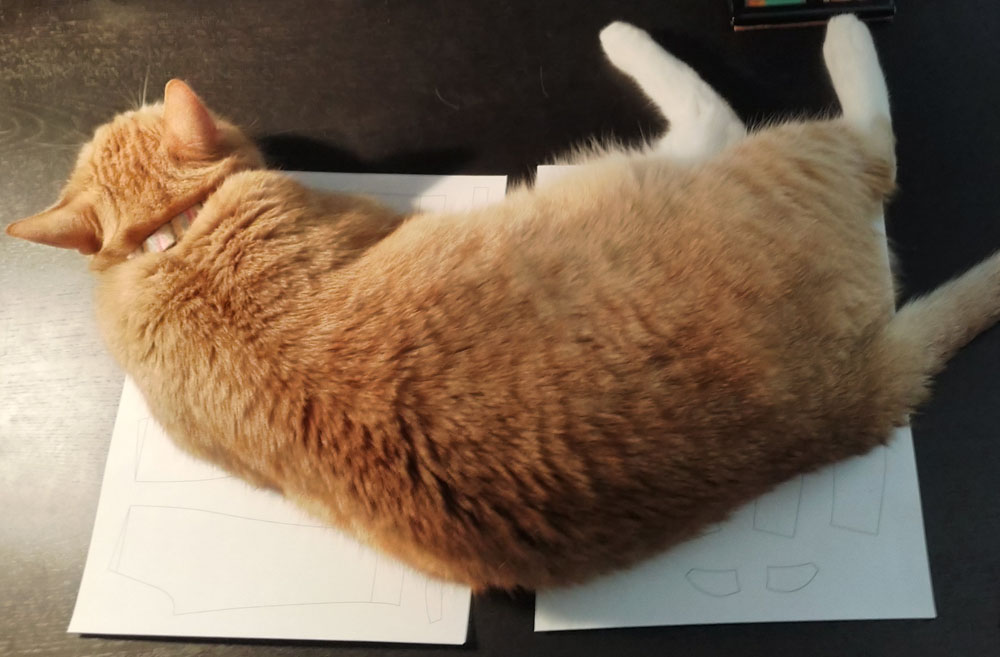 And this is what the printouts looked like five seconds later.

Stapling the pieces together was a chore, but when the vest was together, and I could see that the pattern was, in fact, yielding something jacket shaped, the effort felt worth it. 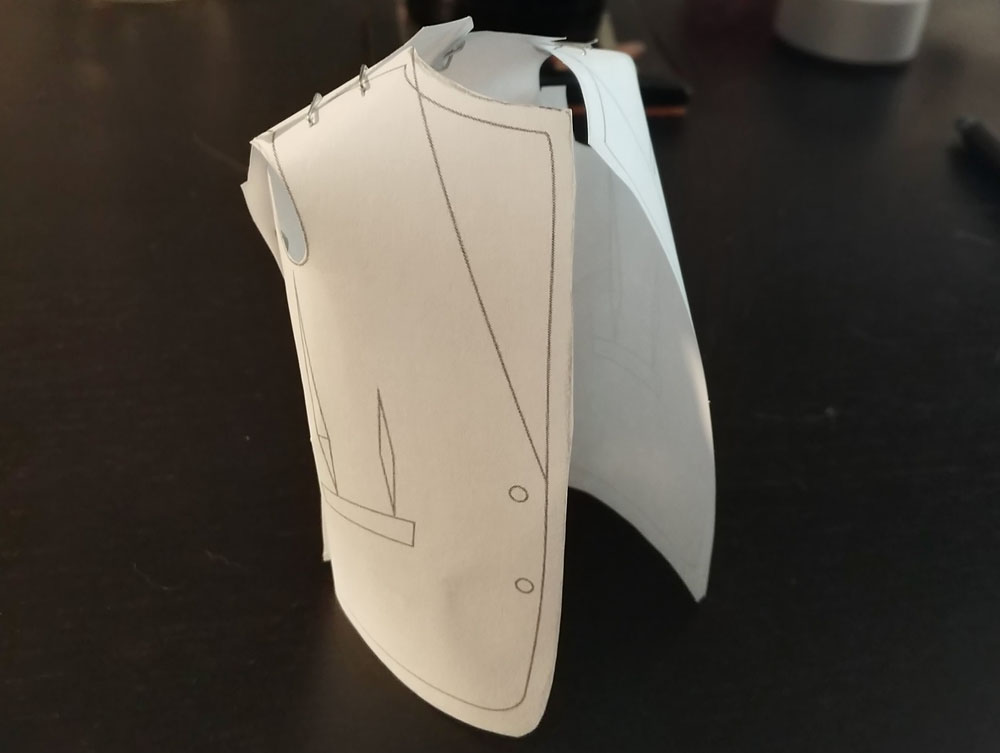 I may be crazy, but to me, that looks promising.

In the end, all of the pieces went together as they were supposed to. Here, for your admiration, I present the first suit made by Scott Meyer, photographed next to a giant novelty quarter, for scale. 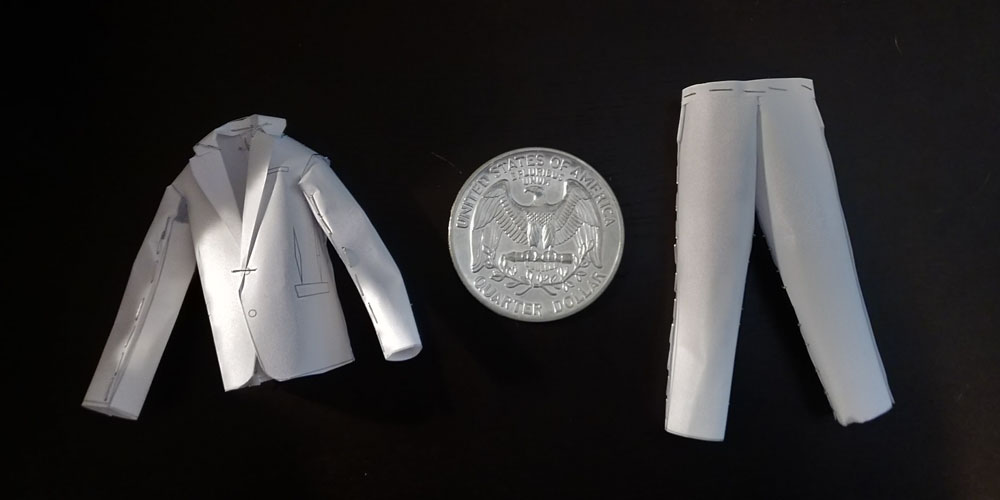 Because the test measurements did not all come from the same person, the pants are substantially larger than the jacket. Also, the sleeves look long because they are not hung quite properly. LOOK, I INVITE YOU TO MAKE YOUR OWN TINY PAPER SUIT IF YOU THINK YOU CAN DO BETTER!

Finally producing something other than credit card charges and curse words lifted my spirits nicely. That’s a good thing since the next logical step is to take my measurements. I have not been looking forward to this, but if you have, come on back next week!