The Tale of the Tape

Today, we talk about taking my measurements. I have not been looking forward to this. I suspect you haven’t either.

I give you my word that I will not post any pictures of me in a state of partial undress. In return for this kindness, I will spare myself the indignity of telling you any of my measurements. Yes, you read that correctly. I won’t do something I don’t want to do as a way to reward myself for not doing something nobody (including me . . . heck, especially me) wants me to do. That, my friends, is the art of the deal.

Life is funny. People think of commissioning a bespoke suit as an extremely dignified and genteel activity, but the first mental image that leaps into most people’s minds when they think about it is usually the customer getting measured, the least dignified part of the process. I suspect it’s because that’s what we always see on TV and in movies because showing a character being measured for a bespoke suit is a good shortcut to demonstrate that the character has money and or power.

In reality, measuring myself for my suit was not glamorous, and did not make me feel powerful.

Instead of a well-appointed showroom or a picturesque tailor’s shop, my measuring up took place in my bathroom. Instead of a professional tailor and his assistant, my wife measured me, and I wrote down the procession of alarmingly large and surprisingly small numbers she called out while our cats looked on as if they were watching the most fascinating yet horrifying spectacle imaginable, like viewing a train wreck through a kaleidoscope.

The object of the measuring is, of course, to attain an accurate record of the exact dimensions of your body so that the finished suit can be tailored to fit you, and only you, perfectly. If I’d been in a mood to go nuts, there’s any number of esoteric measurements we could have taken. The following chart will give you some idea. 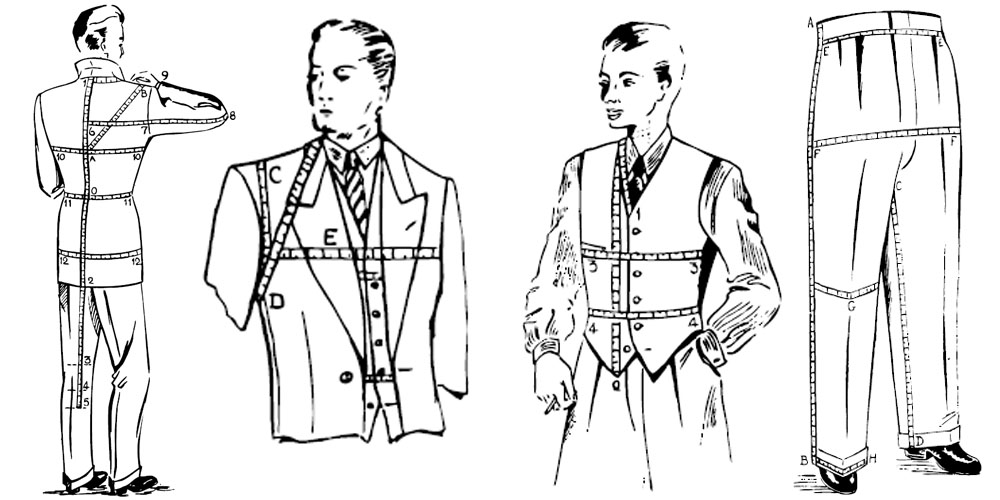 Vest-Guy looks friendly enough, but the guy in the three-piece with the peaked lapels looks like a jerk. No wonder the little guy’s about to backhand him.

Happily, the pattern system I opted to use only called for a fairly basic and self-explanatory set of measurements, save for one, which I’ll leave for last.

Inside Leg A.K.A the dreaded “Inseam”:

Waist: The circumference of your waist. (Like I said, many of these are self-explanatory.)

Seat: Like the waist measurement, only instead of measuring around your waist, you measure around your seat.

Knee: Like the waist and the seat, only you measure around your knee. One knee, not both together.

Bottom: This might be mistaken for the same thing as the seat, but it is a measurement of how wide the cuffs at the bottom of the pant legs are.

That’s it for the pants. Now we move on to the jacket.

Natural Waist: This is where the narrowest part of your torso is.

Fashion Waist: This is where you want the narrowest part of your torso to appear to be. Part of tailoring is the art of illusion (picture me waving my hands around like David Copperfield as I say this).

Length: The length of the jacket, I.E. how far down you want it to hang.

Half-Back: The width from the middle of your spine to where your shoulder meets your sleeve.

Chest: Remember when we measured the waist and the seat? Same thing, but with your ribcage. In some systems, this is done while wearing a jacket.

Waist: Same as with pants, only, again, in some systems, this is done while wearing a jacket.

Seat: As I said, same as with pants, but sometimes done while wearing a jacket.

Elbow: the distance from where the sleeve meets the back to the point of the elbow. This is measured while you stand with your arm extending straight out to your side with your elbow bent as if you’re waiting for your hunting falcon to return.

Wrist: Same as with elbow, only continuing around to the wrist.

Elbow Width: This is a measurement of how big around you want your sleeve to be at the elbow.

Cuff: How big around you want your sleeve to be at the cuff.

Tailoring has changed little in the last, oh, two hundred years, but I can see where technology could speed it up in some places. All of this measuring could be replaced by a digital scan, creating a 3D model of your body that would be perfectly accurate in every way. This scan would be useful, both for taking and double-checking measurements and for use in any number of blackmail schemes.

Looking at my measurements, the results are, sadly, not surprising. I already knew that I had a long waist, a short inseam, and needed to go on a diet.

Here’s a semi-related question. Why is it that being presented with evidence that I need to go on a diet makes me want to stuff myself with peanut M&Ms? It just seems counterproductive, unless it’s natural selection at work. Perhaps instinct is driving me to eat my way out of the gene pool. It’s an interesting theory. Maybe I should write a paper; apply for a few grants.

The final measurement we took, and by far the strangest, is the “Depth of Scye.” Scye is an archaic old term that I’ve read translates roughly to “The eye of the shoulder.” In practical terms, it’s the armhole. Measuring the “depth of scye” tells you how deep to make the armhole. This is accomplished using two rulers, a yardstick, and a tape measure.

Once all of the measurements were taken, I put my clothes back on, shook off the emotional damage, and moved on to next week’s topic, making my pattern!