I’ll begin, yet again, with an explanation of the blog post’s title. The following is a (NSFW) sketch from the British TV series That Mitchell and Webb Look.

That woman is Olivia Coleman, by the way. For the next couple of seasons she’ll be playing the Queen on the Netflix series The Crown. You might also remember her from Hot Fuzz.

I’ve purchased my materials and made my patterns. Now it’s finally, after weeks, time to cut some fabric!

The first step is to transfer the pattern to the fabric, so I know what, and where, to cut. 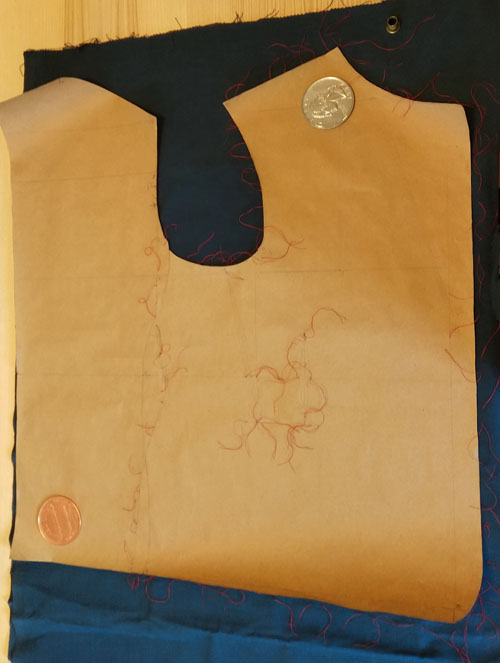 Here’s a tip. It turns out that oversized novelty coins make great paperweights!

The traditional method is to use chalk, specifically, a big flat piece of chalk, like an oversized guitar pick. As you remember, a couple of the lines of the jacket pattern overlap. I marked those portions with tailors tacks, then used the chalk to connect the dots when I removed the paper pattern. 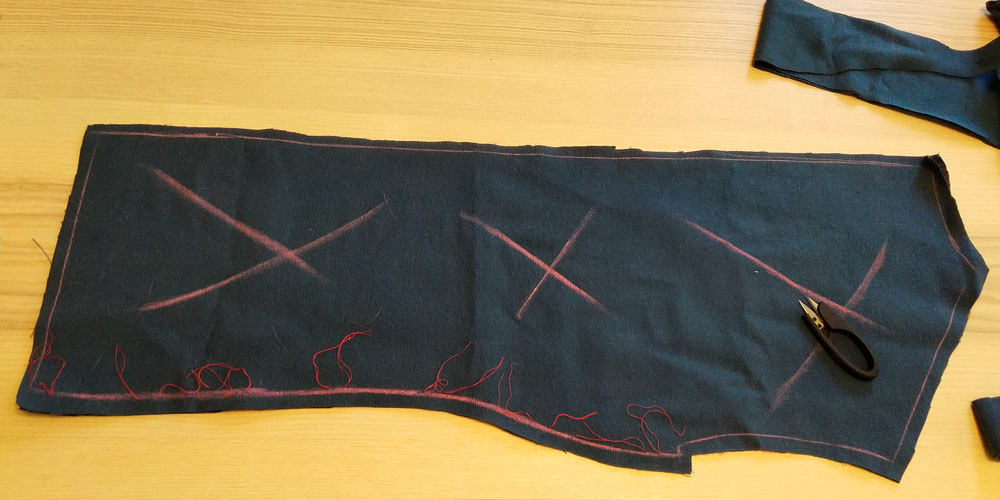 The three Xs mean that this is the inside of the piece, not that the piece is either obscene or potently alchoholic.

It turns out that the flat blade of chalk makes it easier to draw a straight or gracefully arced line. It’s like the blade of an ice-skate, except it doesn’t fill me with mortal terror, the way ice skates did the one time I tried them.

You may have noticed that when I was drawing up my patterns one of our cats interfered with my work at every opportunity. One might wonder, now that I’ve moved on to fabric, which doesn’t make that (apparently) intoxicating crinkly noise that seemed to draw the cat’s attention, if my work has managed to maintain her interest. 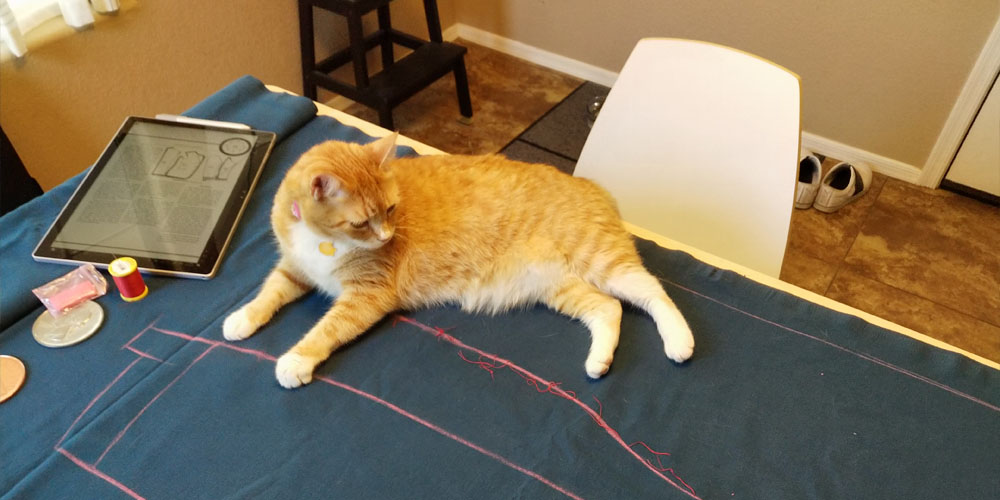 It seems the crinkling noises were not the main attraction.

Of course, now instead of just damaging some paper and impeding my ability to get things done, she also risks poking permanent holes in the fabric with her needle-sharp claws. So far, she has refrained from using her claws when jumping up on the table. The claws only seem to come out when I try to lift her off the fabric. I know intellectually that she’s just trying to dig in to prevent me from lifting her off of the fabric once she’s on it. The practical upside is that my fabric remains safe and undamaged as long as I don’t try to move her.

It is, essentially, extortion. My fabric remains undamaged as long as I allow her to sit on it whenever she wants, for as long as she wants.

Oh, and while she is refraining from poking holes in the cloth, she has no qualms about shedding all over it. 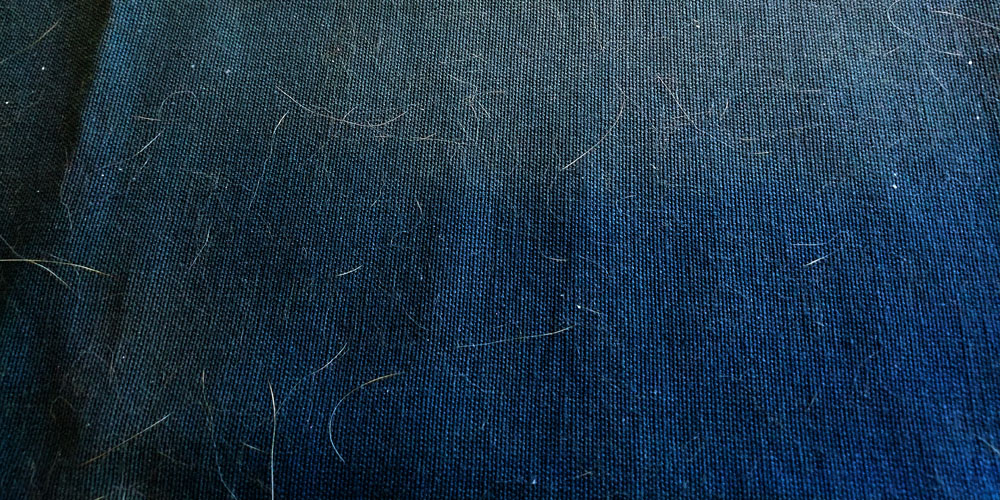 I should make the next suit orange.

Now, you might be thinking that once the pattern pieces are outlined in chalk on the fabric, it’s a simple matter of cutting them out, but you’d be wrong. You see, while the point of making the pattern was to determine the shape of the pieces of fabric I’d need, the shape is not THE SHAPE. It’s just the starting shape. You have to add more shapes to the shape if you want the real, final shape.

Put less confusingly, the “cutter,” (in this case, me) must add specific amounts of extra material in strategic areas to give the tailor (in this case, also me) room to alter the shape of the garment after the first fitting. The textbook I’m working from refers to these bits of extra material as “Inlays and Turnings,” but being an American from the 21st century, I’m more inclined to call it a “Fudge Factor.”

Here’s the diagram from the book 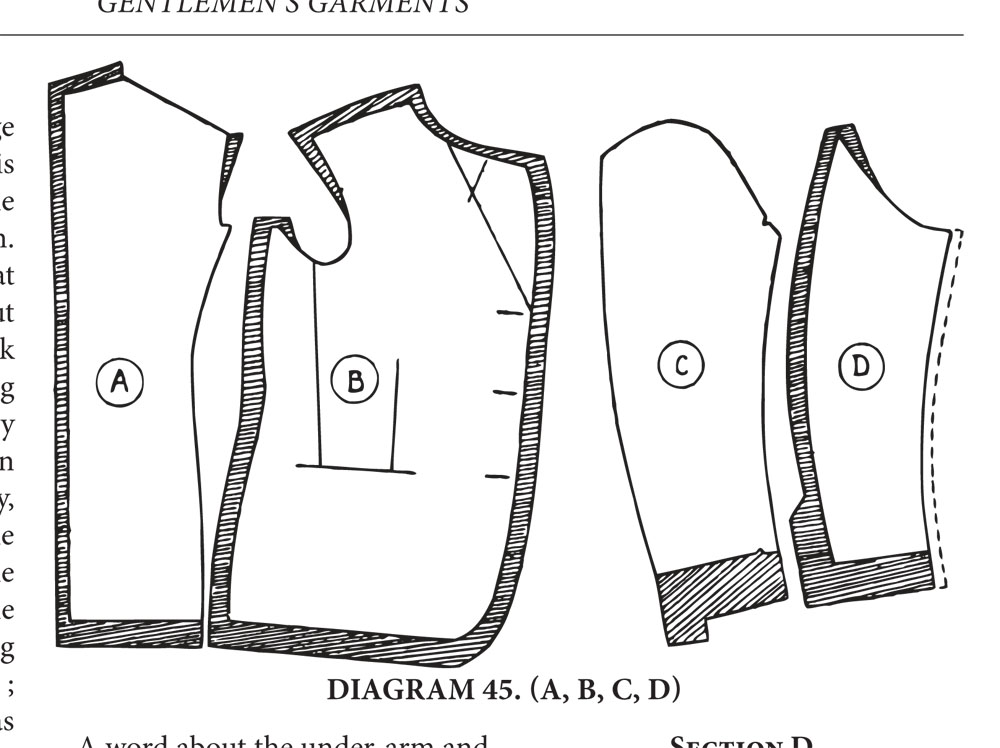 The darker parts are the parts of the pattern that are not actually included in the pattern.

And here is the finished front piece, cut out with its fudge factor fully . . . intact. (I tried to find a synonym for intact that started with an F. I promise I did.) 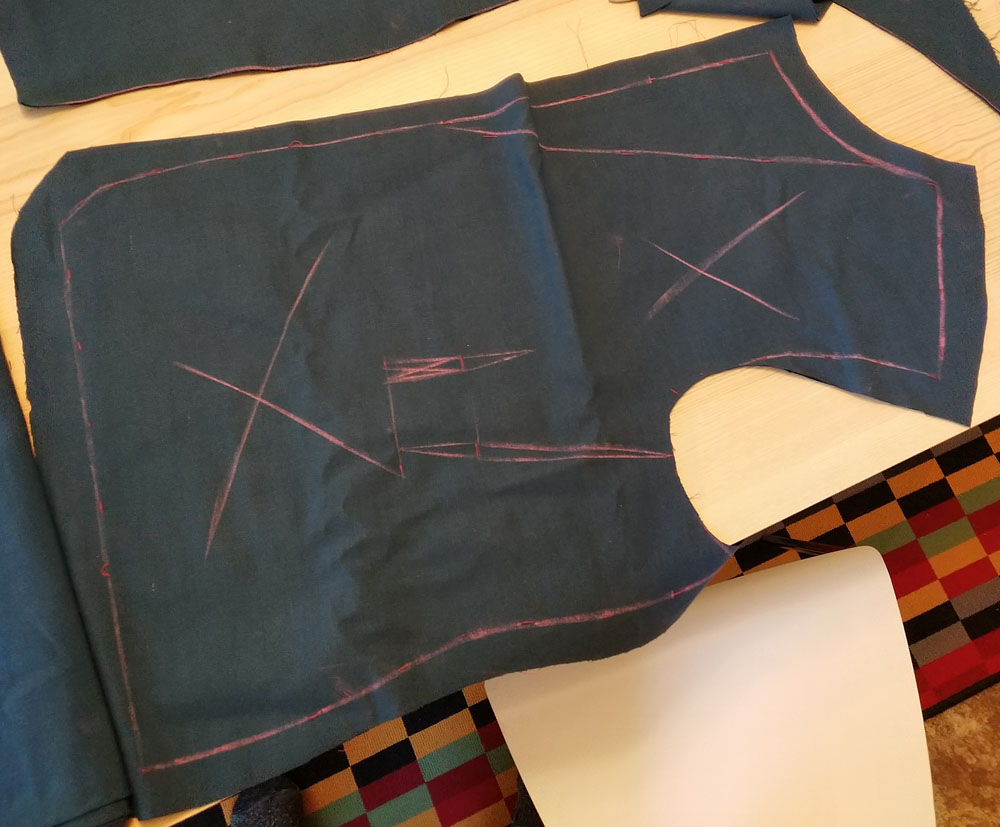 Drawing lines and cutting with scissors. it’s amazing how much of this project is requiring skills I picked up in kindergarten, and how little aptitude I’m showing for those same rudimentary skills.

From there it was a matter laying out my bolt of fabric, folded over double so that I’d end up with two mirror image copies of each piece, tracing each pattern piece onto the fabric, adding the fudge factor, then cutting the pieces out. I worked carefully until I had every piece of the pattern rendered as mirror image pieces of cloth. 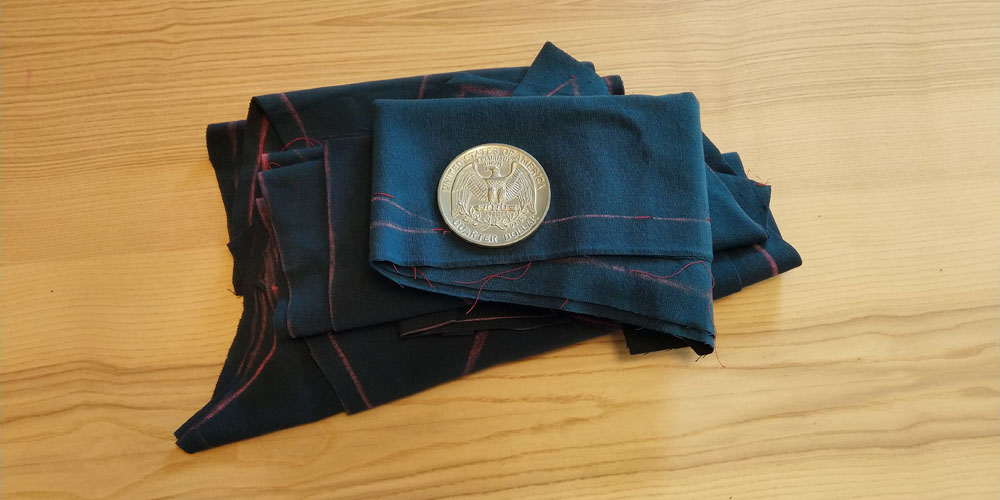 The outer shell of my suit, stacked under an oversized novelty quarter, for scale.

I cut the last piece for the pants, using up the final bit of fabric. It seemed I had purchased the perfect amount. I patted myself on the back, proud of both my thrift and the accuracy of my estimate.

Then I read the next bit of my instructions, which said to use the front-piece pattern to cut “Front Facing, which is the portion of the jacket that forms the outer part of the lapels and the part of the lining that holds the inside pocket. It is, arguably the very first part of the jacket most people will notice, and as such, it’s vitally important that it be cut out of the same material as the rest of the jacket.

As I literally just mentioned, I didn’t have any more fabric left. I went from being smugly proud of a thing to shouting obscenities and cursing myself over the exact same thing in the space of twenty seconds.

To find out what I did about it, tune in next week.