What Scientists Refer to as a “Result”

So, when last I posted, I was about to baste all of the pieces of the jacket’s main body together and see how it fits.

So, yeah, I did that. Here’s a picture of me wearing it.

There is extra material beyond the pattern lines along the armholes and the lapels, so those look larger than they should, giving the whole thing sort of a “Big Bad Voodoo Daddy” vibe, but aside from that, I think it looks pretty good. The collar needs some work. 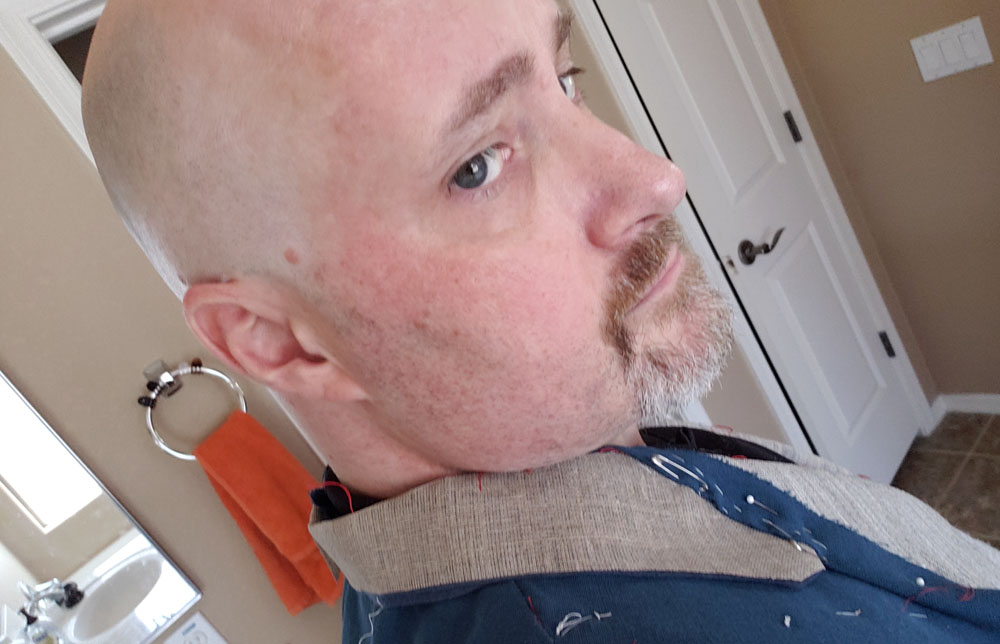 If you’ve ever wondered what I’d look like from the point of view of a parrot sitting on my shoulder, now you know.

But all in all, not bad. There’s still a long way to go, but looking at this image, I’m convinced that, given enough time and motivation, I can make an at least passable suit from scratch.

But as I said, there’s a long way to go. In fact, this point in the process seemed like a good chance to look over the rest of the project to see what my future held.

Here are the remaining steps in the creation of the jacket, in order:

-Rip the pieces I just sewed together apart, making minor adjustments so that the whole thing will fit better.

-Permanently attach the canvases to the lapels, which is done with more pad stitching.

(As you might remember, last time the project called for pad stitching it took sixteen hours of labor. To attach the lapels, I have almost the same amount of area to pad stitch, but instead of doing a basic pad stitch where the stitches go all the way through all of the layers of fabric, the lapels get a blind pad stitch. In a blind pad stitch the needle goes all of the way through the canvas, but then carefully picks up a few threads of the suiting fabric without penetrating it before coming back out through the canvas. This results in a stitch that takes a lot more time and care to execute but cannot be seen from the outside of the garment. I figure this step would easily take at least another sixteen hours of labor all on its own.)

-Sew the body of the jacket together and attach the arms, which I’m already suspicious will need to be redone because the pattern pieces have never quite looked right to me.

-Attach the collar, which, as I showed in the photo above, didn’t look quite right in the first fitting, and may also need to be redone from scratch.

-Construct any inside pockets I intend to have.

-Try it on again, then rip open and resew any places where the fit could be better.

-Once I’m happy with the fit, sew on the buttons and hand turn the buttonholes, another highly labor-intensive process on par with the pad stitching.

As of now, I’ve already put in 56 hours of labor on this jacket. With the pad stitching, the buttonholes, and everything else, I figure there’s at least another 50 hours of work ahead in the project, at the end of which I’ll have completed the jacket of the inexpensive test suit. I’ll still have no pants to go with it, and the entire expensive suit left to go.

My feelings after looking over the work left to be done are best summed up by Martin Landau’s stirring speech from the first episode of Space: 1999, which culminated in the following heroic sentiment.

I was less eloquent and didn’t have a dramatic orchestral sting. I think my exact words were, “Screw that.”

I’m sorry folks, but a big part of the reason for doing this project was to learn. One of the clearest lessons I’ve learned is that I DO NOT ENJOY SEWING!

I had hoped that I’d come to find the repetitive, purely physical activity of hand stitching therapeutic. That never happened. Weeks ago I reached the point that I dreaded getting out my needles and thread. I kept going out of hope that I’d break on through to the other side, but I no longer believe there’s another side.

My poor wife has watched this whole sorry chain of events unfold. I was afraid that she would be disappointed in me, but when I told her I was quitting, she looked relieved.

I told my friend Ric. (Those of you who’ve been with me since my comic strip Basic Instructions will appreciate the thick, viscous irony of me telling Ric that I’ve failed at something.) When he stopped laughing at me, he asked, “But what about all the time you’ve already put in, and the money you’ve spent on material and equipment?”

The thing is, I don’t feel that just because I’ve already wasted a bunch of time, I’m somehow obligated to waste much, much more. As for the money, I thought about that, and I can honestly tell you that I would happily . . . HAPPILY . . . pay the amount of money I’ve spent on this project to never have to sew again.

I’m not someone who gives up on things easily, and on the day I decided I was done I felt like a wretched failure. The next day, however, I was in a fantastic mood. I felt like I had quit the worst job I’d ever had. There was a song in my heart and a spring in my step, so much so that I threw my back out pretty severely by walking in too springy a manner.

Aside from the fact that I should never sew again, I have also learned the following lessons:

-A bespoke suit takes an insane amount of skilled labor to create.

-My labor is not “skilled.” As such, I need to compensate by being careful, spending much more time, and going back multiple times to correct mistakes. 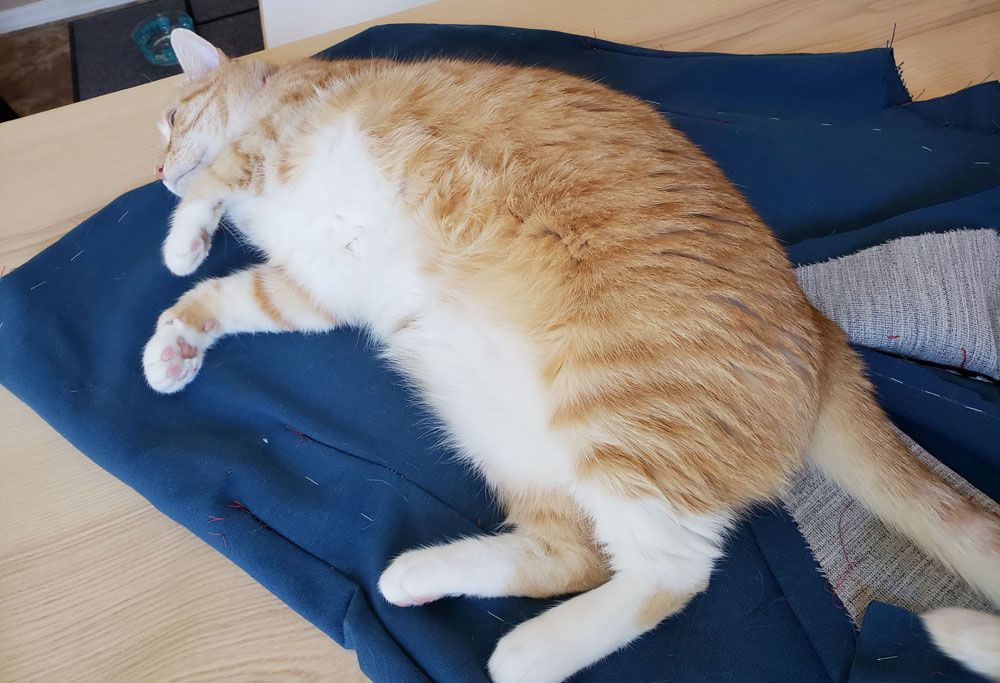 She’s been a constant source of inconvenience and aggravation, and yet I can’t get mad at her. It’s very much the way my mother viewed me when I was a kid . . . except for the “not being able to get mad” part.

Thanks for joining me on this doomed journey into the unknown. Now if you’ll excuse me, I have a novel I’m very excited to start writing, which I have been neglecting in hopes of making some headway on the suit.